They tried to tame the Klamath River. They filled it with toxic algae instead.

A century of development has fueled harmful blooms along the Klamath River in northern California. Now, the native Karuk tribe and its allies are trying to undo the damage. 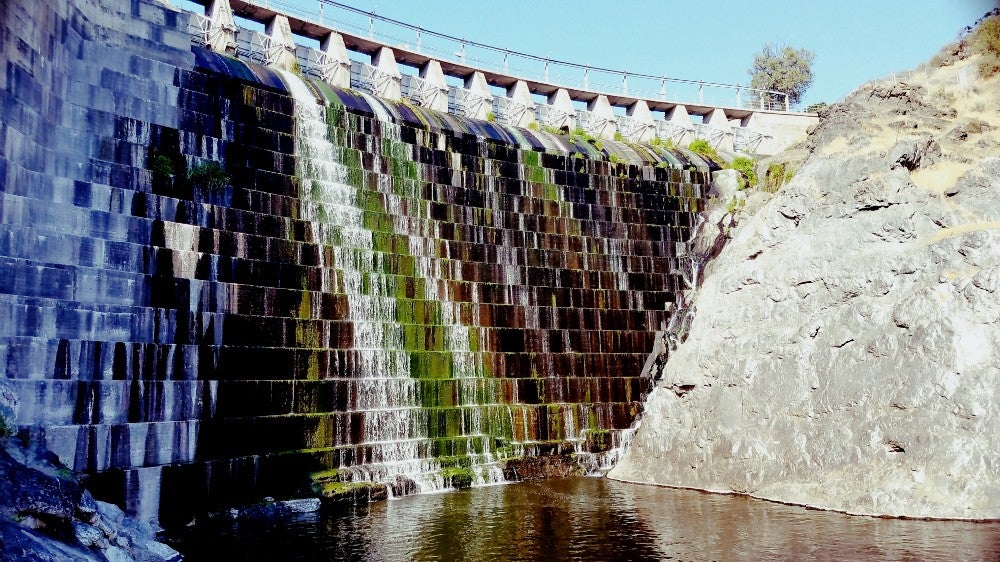 The Copco No. 2 Dam is also slated for removal. The Karuk tribe
SHARE

The Karuk people define themselves by the Klamath River, just as the Romans did the Tiber or the Egyptians did the Nile. The word “Karuk” means “upstream,” a reference to the waterway, which runs from Klamath Lake in southern Oregon, across the mountains of northern California—where the Karuk live—before emptying into the Pacific Ocean. Every year, at the end of summer, the Karuk celebrate the river, the mountains, and the forest in their “making the world right” ceremonies.

As part of these ceremonies, priests bathe in the river. But from July through November, when the water is warmest, the Klamath fills with blue-green algae that render the river toxic. The algae—which are not actually algae, but a species of cyanobacteria, Microcystis aeruginosa—turn the water bright green and lend it the smell of rotting seaweed. People can get rashes from bathing in the river or become violently ill from drinking the water, suffering nausea and diarrhea at the height of the ceremonies.

“It would be like going to mass and them giving you toxic algae to drink instead of wine,” says Craig Tucker, natural resources consultant for the Karuk tribe. “People are supposed to be in the water conducting religious ceremonies, and now they have to decide, is it more important to practice their religion, or is it more important to protect their health? It’s a horrible dilemma.”

Over the last century, humans fueled the algal blooms by draining wetlands, erecting hydroelectric dams and building farms along the Klamath—all of which upset the natural balance of the river. The water grew warmer and filled with nutrients, allowing the cyanobacteria to thrive.

Healing the Klamath means reversing decades of damage. Humans conquered the river and the wetlands, and now the Karuk and their allies are trying to break the binds. The work is slow and arduous, and was made more difficult this month when federal regulators put a carefully crafted plan to remove a series of hydroelectric dams in doubt.

“Every day, I pray for clean water, and it’s just disheartening when you go outside, and you smell that smell, and you see the river,” Saxon says. “It weighs on me quite a bit.”

Harmful algal blooms aren’t new. Researchers have been studying algal blooms since the dawn of the scientific revolution. One of the earliest papers published in Philosophical Transactions, the world’s oldest scientific journal, is a 1672 account of Tuchomskie Lake in Poland, which had become “green in the middle with an hairy efflorescence.” Cows, chickens and dogs, the author testified, died from drinking the lake water.

The problem of harmful algal blooms, however, has grown substantially worse over the last 200 years. That trend accelerated in the last half-century as humans altered the conditions in lakes and streams to favor cyanobacteria.

For the Karuk tribe, the problem began in 1906, when the Klamath Project, a federal initiative, started draining the wetlands abutting the river to turn them into farmland. The fertile volcanic soil of the Klamath River Basin made it ideal for farming, so officials carved up the map, offering plots of land to returning service members after each world war. After World War II, demand was so high, they held a lottery. The Klamath Union High School band played as veterans waited to hear if their names would be plucked from a pickle jar and read aloud on national radio.

By turning wetlands into farms, the Klamath Project unwittingly gave ammunition to cyanobacteria. The rich volcanic soil that made the land so well-suited to farming also yielded the nutrients that fed cyanobacteria. At one time, the grasses that grew in the wetlands absorbed these surplus nutrients. But when the Klamath Project built dikes around the wetlands, it blocked this critical offramp, allowing those nutrients to collect in the river. Farmers later compounded the problem by feeding their crops synthetic fertilizer, which drained into the Klamath, helping nourish harmful algal blooms.

The Klamath Hydroelectric Project further aggravated the problem by building a series of power-generating dams along the middle Klamath, the first of which went online in 1918. Each dam created a large, mostly stagnant reservoir of water where cyanobacteria could feed, sunbathe and multiply.

Climate change has likely worsened the problem. Globally, rising temperatures are warming lakes and streams, helping spur the growth of cyanobacteria, studies show. Climate change is also fueling drought, which dries up rivers, slowing their flow. This further helps cyanobacteria, which fare better in slower-moving water, where they can gain a foothold. The Klamathdis now subject to yearly blooms, during which cyanobacteria produce microcystins, a liver toxin and potential carcinogen that can kill animals and make people sick.

“People knew for years that the reservoirs turned green, but they didn’t really understand what that was until 2004 when the Karuk tribe’s water quality team took samples and sent them off to a lab for testing. The lab called us and said, ‘We don’t know where you got that water, but do not touch it,’” Tucker says. “These reservoirs have become liver toxin factories, just pumping this stuff out.”

Harmful algal blooms aren’t limited to the Klamath River. They have taken hold in all 50 states, according to the Natural Resources Defense Council. One 2014 bloom in Lake Erie grew so large that it showed up in satellite images. In Toledo, Ohio, which draws its water from the Lake Erie, locals were told to drink bottled water, because the tap water could make them ill.

Unlike humans, aquatic flora and fauna can’t escape the algal blooms. Plants suffer because cyanobacteria, which sit on the surface of the water, prevent sunlight from reaching areas below. And fish suffer when the cyanobacteria eventually die off. The microorganisms that gobble up cyanobacteria remains consume huge volumes of oxygen during their feast, leaving fish to suffocate.

Because algal blooms have no single cause, they also have no easy fix. Healing the Klamath means unspooling the bitter legacy of manifest destiny, and returning the river to a more natural state.

In 2007, the Karuk tribe, joined by conservationists and fishers, brought a lawsuit against California regulators, who had failed to deal with the toxic microcystins in the river. They won. Thereafter, California listed the Klamath as “impaired” by microcystins. This made it harder for the regional power utility, PacifiCorp, to continue operating the hydroelectric dams that were fueling the algal blooms.

“If PacifiCorp wanted to try to keep their dams and get a new license, they would have to somehow mitigate these algal blooms to the point where they were compliant with the Clean Water Act, and they weren’t sure how they could possibly do that,” Tucker says.

The company weighed using algaecides in the reservoirs. It also considered installing aerators, which would stir up the water and prevent cyanobacteria from settling in. But such measures would prove expensive, and hard to justify, under the circumstances. Not only did PacifiCorp have to curb the algal blooms, it also had to upgrade its dams to allow salmon to move upstream. Given the high cost of addressing both challenges, it would be cheaper to remove the aging dams entirely.

In 2016, PacifiCorp agreed to a plan to remove the Copco № 1, Copco № 2, J.C. Boyle and Iron Gate dams. According to the plan, PacifiCorp would transfer ownership of the dams to the newly formed Klamath River Renewal Corporation, which would tear down the dams with funds from the power utility and the state of California.

This month, however, federal regulators threw a wrench in the works when they said that PacifiCorp must remain a co-licensee of the dams. As a co-licensee, the utility would face millions in additional costs, a fact that has threatened to undo the plan. Parties say they are optimistic that they will be able to revise the deal to keep PacifiCorp on board. If they are successful, the largest dam removal in U.S. history will kick off in 2021.

Even then, however, it will only be the first step in stemming the toxic algal blooms. The Karuk still face rising temperatures and high nutrient levels. “It’s one of those death-by-a-thousand-cuts kind of problems,” Tucker says.

To further heal the river, farmers could build earthen barriers around their farms to prevent fertilizer from spilling into waterways. Officials could work to restore the wetlands, and governments, broadly, could finally take the radical steps needed to curb climate change. For now, algal blooms remain a marginal issue.

While the California Water Resources Control Board is keeping track of harmful algal blooms in lakes and rivers across the state, warning visitors when the water is unsafe for swimming, it has so far set no objectives or issued any regulations related to cyanobacteria.

“In terms of large-scale policy, there isn’t right now any explicit policy in California that’s addressing the drivers of harmful algal blooms,” says Keith Bouma-Gregson, an environmental scientist who co-leads the freshwater harmful algal bloom program for the California Water Resources Control Board.

While the Karuk and their allies mustered the political will needed to tear down a series of aging dams, they are likely to face more resistance when lobbying for regulations on farming. And climate change could only make it harder to find areas of compromise. Currently, drought is stifling growers in the Klamath Basin, so officials are diverting water from the river to farms in the region. Removing water from the river could slow its flow, potentially exacerbating the algae problem, sources said. For the Karuk, it is a relentlessly uphill fight.

“I would like everyone who has had a stake in this process to recognize that our way of life and our connection to our place and to our relatives and our identity as a people is at stake,” Saxon says. “This isn’t our livelihood. These are our lives.”