Irina Polejaeva has the secret to the perfect steak, but is America ready for her recipe? 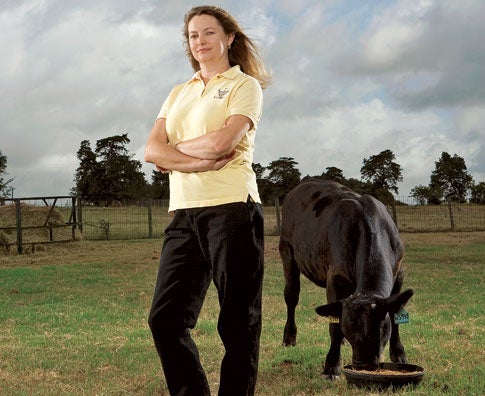 What if you could carve off a chunk of the most succulent slab of steak you´ve ever eaten, clone a bull from it, then produce weeks of identically delectable dinners? Irina Polejaeva, chief embryologist at ViaGen, a livestock-cloning lab in Austin, Texas, aims to bring cloned beef to the American dinner table within the next few years. Since 2005, ViaGen has cloned half a dozen cows from strips of beef, a procedure that enables the company to test the quality of the meat before bringing it back to life. Clones would head to a breeder, and their offspring would go into a chain of feedlots, slaughterhouses and, finally, your burger. But first, the Food and Drug Administration must rule on the safety of cloned meat, a decision that could make or break the most controversial idea in the food industry since the transgenic tomato.

**Why clone from dead animals?

** It´s hard to evaluate whether a live animal will produce great meat. Meat is graded on quality and yield; to be outstanding in both is very rare: 1 in 8,000 animals. We´re duplicating the best animals-those that carry the most desirable traits.

So if a beef inspector says, â€Wow, this is a gorgeous piece of meat,â€ he can send a sample to a lab and make a clone?

Yes, we can certainly do that. The procedure is basically the same as it is with a live animal, except the tissue sample has to be taken within 48 hours of death.

Why do you think some people find the idea of eating cloned meat alarming?

People are unfamiliar with the technology. It´s misperception and lack of information.

No need to panic over a cloned burger?

From the scientific point of view, there´s no doubt that cloned beef is safe to eat. The FDA has reviewed hundreds of studies on this. There´s no reason to believe that meat coming from clones or their progeny is any different from traditional products.

**Can clones really be as healthy as naturally born animals? Case in point: Dolly the sheep. She died young, right?

** Yes, but she lived indoors and didn´t have the typical life of a sheep. Several clone mates of Dolly are approaching nine years old and doing fine.

** One study on cloned pigs showed that 5 out of 10 died due to birth defects.**

A lot of birth defects are related to poor technique. Our people are doing this three to four times per week, not a couple times per semester. The efficiency has to be high or it won´t work economically.

How much does it cost to clone a cow?

**Not yet. The cows are very young, and we plan to use them for breeding. But I´d love to have the chance to taste it. I´d have a good rib eye. That would be great.