We live in a world designed by Charles K. Kao, Willard S. Boyle, and George E. Smith. Their work on... 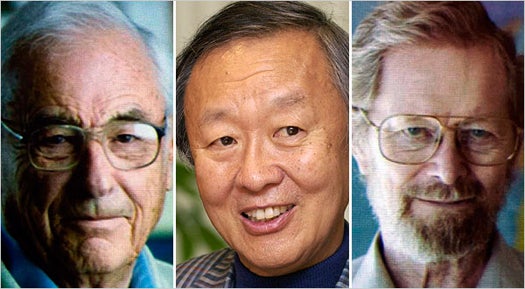 We live in a world designed by Charles K. Kao, Willard S. Boyle, and George E. Smith. Their work on the physics of light made possible the fiber optic cables carrying this web page to your phone, and the digital camera on the other side. And on December 10th, King Carl XVI Gustaf of Sweden will award them the Nobel Prize in physics for their work.

When Kao began working on fiber optics, the most advanced cables could only carry a light signal about 65 feet. By determining how the purity of the glass and the manufacturing methods influenced the transparency of a fiber optic cable, Kao laid down the principles that would lead to a half-mile-long cable within 4 years.

With these three wins, the number of American Nobel Laureates rises to a world-leading 76. Britain remains in second place with 21 wins. Which is to say, USA! USA! USA!