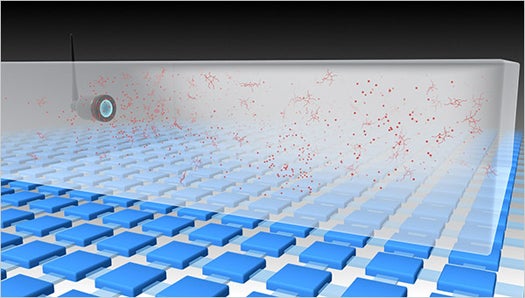 In the beginning, there were organic molecules. And they were good, but unorganized. Then, those organic molecules formed proteins, and evolution kicked in and started a three-billion-year journey culminating in you and me. But the question of just how life made the jump from inert organic chemicals to the complex building blocks of life has vexed scientists for years.

A company hopes that software originally designed to find extraterrestrial life will now help them unlock the origin of life on this planet.

The company, EvoGrid, has built on the historic distributed computing program SETI@Home, creating a program that harnesses unused computing power to simulate the random, emergent patterns of complexity that stewarded the jump from organic compounds to large-scale proteins.

EvoGrid utilizes two open source programs, one that links together the computers and the other that runs the simulation. The linking program, Boinc, provides EvoGrid with supercomputer power at virtually no cost. Boinc already links together over 500,000 computers that together generate twice as much digital muscle as the world’s most powerful supercomputer.

The simulation program, Gromacs, creates a virtual soup of organic molecules in the computer, and then models how those molecules randomly link together. Given the chemical rules that govern the molecules, they will, over time, produce more and more complex networks of molecules. EvoGrid hopes that those networks of molecules will display the patterns of the basic building blocks of life.

So far, the project has yet to evolve any virtual life, but the project just got started. Eventually, EvoGrid hopes to produce simulations on so large a scale that they can be used to generate computer models for the development of new drugs or the study of complex diseases.