How lizards protect themselves from unwanted male advances 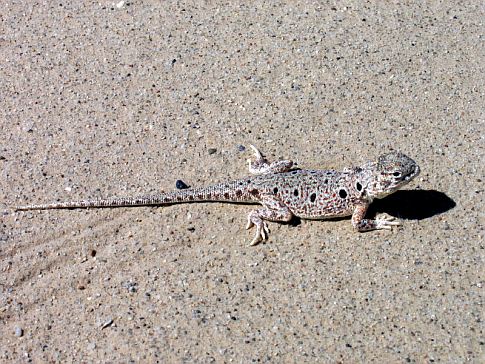 Sex for a female Lake Eyre dragon lizard is sometimes like going to bed with a man and a roaring chainsaw. The male lizard bites her neck before mounting her. If he sinks his teeth in with too much vigor, he can chomp her spinal cord and kill her.

So it’s no wonder the lady lizards are choosy about sex. 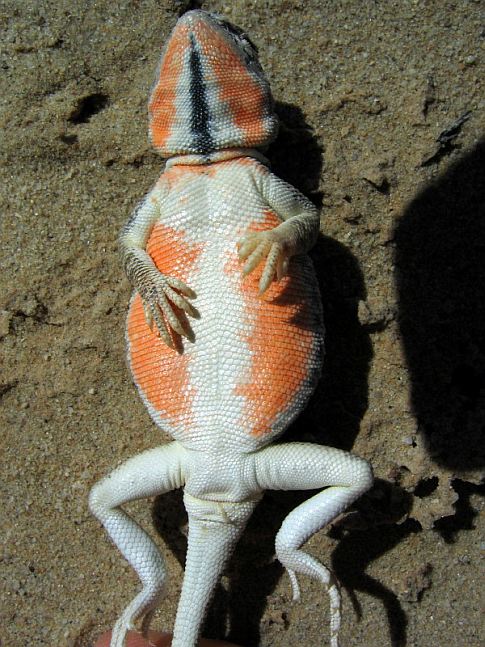 Not Tonight, Dear, I’ll Have a Neckache

In defense against nonconsensual copulation, the female Lake Eyre dragon has a trick unknown to any other lizard. She might just throw herself onto her back. (Although this position in human sexual culture might connote “lie back and think of England,” for these lizards the position is completely un-mountable.)

Although the display saves her from risking life and limb for a romp in the sack with a no-good, lame suitor, it also puts her at risk of being picked off by predators: when she flips over, she ends up showing off her tasty bright orange belly. Usually both male and female Lake Eyre dragons are dully colored, which helps them blend in with their surroundings. But when the time is right and the eggs are ripe, the ladies’ bellies turn bright orange, which attracts mates. It’s a tradeoff, but apparently sometimes worth it.

The wild courting ways of the Lake Eyre dragons has gotten some press lately because of a new study led by Devi Stuart-Fox at the University of Melbourne (presumably no relation to the frequent PopSci.com contributor). The study shows that the female color change and mating behaviors are correlated with an increase in the sex hormones progesterone and testosterone. (In many animals, including humans, females and males have both testosterone and estrogen.) Although hormone influences on male animals’ sexual behavior has been pretty well studied (more testosterone generally correlates with more aggression), their role in female courtship rejection is now beginning to be elucidated in studies such as this one.

Aside: The male Lake Eyre dragon has some tricks of his own, for he is blessed with an abundance of penises. No typo there. That was plural. Two members per male. (Other creatures have a plethora of penises, too, something the Sex Files’ Agent Locke plans to investigate in a future filing.)