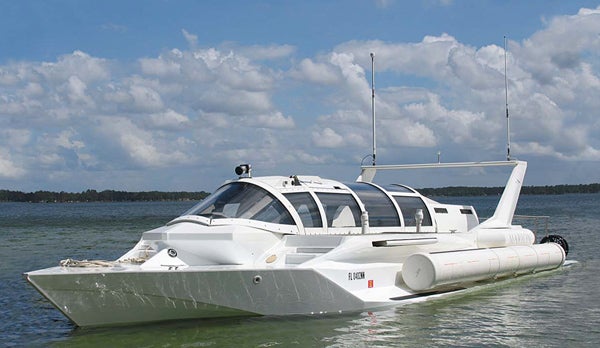 Nautical engineers have long dreamed of a craft that could race across wave tops like a speedboat and seconds later dive beneath them like a submarine. But crossing the two breeds presents a catch-22: Subs need heft to sink, but speedboats need to be lightweight to go fast. With an investment of nearly $2 million and years of research, former auto-shop owner Reynolds Marion of Lake City, Florida, has finally hit on a solution, a machine he’s dubbed the Hyper-Submersible Powerboat. When complete, it will reach speeds of up to 45 mph and dive down to 1,200 feet. 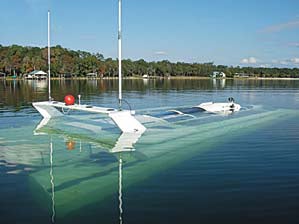 To make the Hyper-Sub sink without sacrificing surface speed, Marion and his team—Gene Mock, a former construction contractor, and Scott Shamblin, an engineer—rethought the ratio of ballast to cabin volume. The ballast systems in most submarines can displace only about 20 percent of the cabin’s volume, but the Hyper-Sub’s ballast chambers double the volume of the cabin. The boat uses a high-pressure pumping system to rapidly fill these chambers with water or air, quickly changing its weight and buoyancy and allowing it to submerge or surface in less than a minute. “This creates more than 12 tons of lift [or sink],” Marion says.

He has designed four add-on kits for the sub that outfit it for applications ranging from day cruises to Coast Guard missions. The only thing left for the team to do is verify that all the sub’s components meet the standards set for both over- and underwater vehicles. Marion expects to start mass production next year, with the subs going for $2.5 to $4 million. 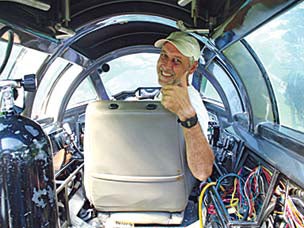 Reynolds Marion at the wheel in the Hyper-Sub’s cockpit

1 To submerge the boat, the pilot opens the hull gates and pumps 30,000 pounds of water into the ballast chambers.

3 Once underwater, the pilot deploys dive fins, angles them downward with a joystick, and engages the thrusters to dive faster.

4 To raise the boat, the pump system fills the chambers with 400 cubic feet of air from pressurized tanks, reseals the hull, and resurfaces in 30 seconds.