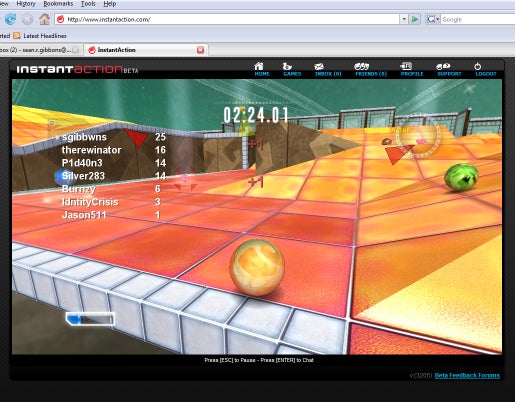 Graphically sophisticated action games you play in a Web browser, for free – is anybody not interested so far?

They come from InstantAction, an offshoot of GarageGames, which is a well-known maker of software tools for game developers. Now the company has created a Web browser plugin that lets programmers build full-featured 3-D games to run within the browser, a feat that’s never been accomplished before. No store-bought discs. No lengthy software downloads and installation routines. You surf, you click, you play. Instant gratification.

While there’s no shortage of free games on the Web, they’re mostly based on Adobe Flash or other 2-D graphics technologies – great for puzzles and quick casual games, but not rich enough for serious competitive players. InstantAction is different, from the quality of the graphics to the depth of gameplay and multiplayer social environment. As InstantAction’s marketing honcho Saralyn Bass explains, “You can invite friends to join you simply by emailing or IMing them a standard URL, which they click just as they would a YouTube link . . . only instead of watching a video, they jump into a 3-D . . . multiplayer action game.

Already, six games are online today, with a seventh in closed beta. My current favorite is Marble Blast Online, a Web-based adaptation of the company’s longstanding Xbox Live Arcade hit, Marble Blast Ultra. This one’s free, single-player and multiplayer, and highly addictive. In the tradition of Super Monkey Ball and the classic Marble Madness before that, you have to maneuver a ball from here to there in a world with completely believable physics and comically complex obstacles. The puzzles are well-crafted, just frustrating enough to make you keep playing one . . . more . . . level.

And then there’s multiplayer, where good gameplay and bad language go hand-in-hand during head-to-head competition (fortunately there’s no microphone support yet so, in cyberspace, nobody can hear you scream).

Rokkitball, essentially a futuristic weaponized multiplayer version of soccer, is another winner. The action really sizzles as you alternate between shooting the ball and shooting your opponents.

Then there’s Fallen Empire: Legions. It sounds like you should be marching columns of Roman warriors into one final glorious battle against the Germanic hordes. In fact, you’re playing jetpack-equipped capture the flag in eight-man teams through complex 3-D environments. The name is dumb. The guys who built it are smart – the blazingly fast action is a programming tour de force.

But are they smart enough to make money by giving away free games? Right now the basic games are free, and rich enough to play that way for hour after hour. Hardcore enthusiasts, though, can buy additional levels, or vehicles, or graphic embellishments, depending on the game. I’ve written before about skill-based games in which entrants pay to play and compete to earn cash, with the host getting an entry fee or taking a cut of the action. Is that a possibility for InstantAction? “Definitely,” says Bass, though she cautions that their main objective is to deliver great games that are accessible to a huge community. “But competition in action-oriented games is a natural fit, and we’ll be rolling out support for official competition in the future.”

And what about advertising, the holy grail of so many Web-based ventures? “We don’t want to do ads if they take away from the gaming experience or get in the way, especially if we’re talking about in-game ads,” says Ms Bass.

No advertising interruptions, games you can play without paying, extra-cost options you’re free to take or leave – I’m not entirely sure how InstantAction turns this into a profitable venture, but that’s their challenge. Mine is licking the tantalizing Upward Spiral level of Marble Blast Online, and figuring out how to look more like a sleek Rocketeer and less like a jet-powered baboon in Fallen Empire: Legions. 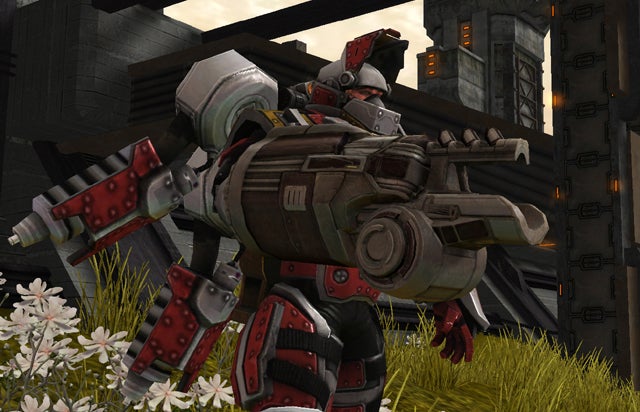 No time to stop and smell the flowers when eight rocket-powered foes are on your tail in Fallen Empire: Legions. 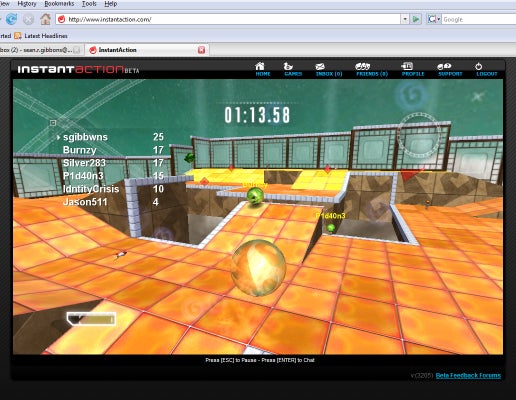 In the multiplayer version of Marble Blast Online, you race opponents to collect gems, while using blasters to push rivals off the treacherous platforms. 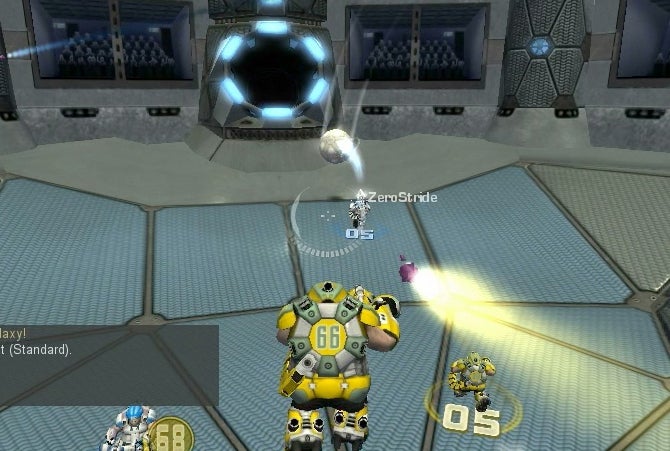 In Rokkitball, as with the other InstantAction titles, you can chat live with the other players, coordinating team efforts or trash talking your opponents.
Entertainment & Gaming
Playing Around