Will John Wilbanks Launch the Next Scientific Revolution?

Using innovative copyrights and a Web 2.0 platform, John Wilbanks may just transform how scientific discoveries are made 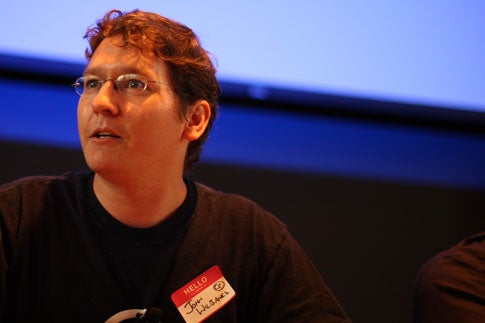 This photograph is licensed to the public under the Creative Commons Attribution-Share Alike 3.0 license by Fred Benenson

When Pasteur had his eureka moment, the processes leading up to it were barely different than Archimedes’s. The scientist hypothesized, created his tools, and executed his experiments with little need for input from his colleagues. My, how things have changed. As science has become increasingly complex and interconnected, even the smallest a-ha instance demands that researchers spend the bulk of their time on grunt work-combing through relevant journal articles that are poorly annotated, begging colleagues for necessary materials (a biologist may need specific cell lines, for instance), and tracking down data sets. As scientific goals grow more multifaceted, the challenges for research and development lie not only in the experiments themselves, but also in the transfer of information among peers.

Enter John Wilbanks, executive director of the Science Commons initiative, and the six-year-old innovation of its parent organization, Creative Commons-an intelligent, understandable copyright that’s revolutionizing how everything from photos to publications are shared. Wilbanks and his team (which includes Nobel Prize winners Joshua Lederberg and John Sulston) are focused on three areas where roadblocks to scientific discovery are most common: in accessing literature, obtaining materials, and sharing data.

In June, Science Commons introduced a set of tools to allow authors greater control over papers published in scientific journals. And this week, Science Commons is expanding its Neurocommons project with the launch of an open-source research platform for brain studies. By using text-mining tools and analysis software to annotate millions of neurology papers, researchers worldwide can find relevant information in a matter of minutes.

PopSci spoke with Wilbanks about how copyright goes wrong and whether scientists can learn to share.

How will an open-access system improve scientific research?

The question is, have we now hit a point where scientific problems are so complex that one person alone can’t solve them? It would certainly seem that way. The problems science is pursuing today-issues like global warming and genomic mapping-demand a distributed approach across disciplines. But currently, journal articles, data, research, materials and so on are stopped by contracts and copyrights at such a rate that it’s become nearly impossible to pull them together. The estimated utility half-life of a scientific paper is 15 years, but the copyright lasts until 70 years after the author’s death. It’s hard to get data sets shared, and the basic elements of the commercial Web (like eBay, Amazon and Google) function poorly, if at all, inside the sciences. The knowledge simply isn’t moving as easily as it should, and transactions are slow on a good day, non-existent on a bad one.

Why the focus on neuroscience?

It started for historical reasons-our initial funder was a Huntington’s disease research group that hoped that if it rolled up all of the research out there, it could move the discovery process along and help a drug company to find a cure. But over time, neuroscience proved to be an ideal focus. There are a lot of “orphan” diseases in the field of neurology: They’re devastating, but because they affect a limited number of people, they generally aren’t financially worthwhile for pharmaceutical companies to take on. But there’s really a lot of shared research between these diseases. Alzheimer’s, ALS, Huntington’s, autism, Parkinson’s, for instance, are all diseases of the brain, with lots of the same cells and systems under investigation, and when you bring them together you dramatically increase the pool of data and materials across the board.

How do you envision the future of Science Commons?

In five years, if everything comes out as I hope, you’ll have a system that looks like Amazon for the life sciences. You could click on one thing-a relevant cell line, for example-and get recommendations for related research or tools. You could one-click and order that cell line from a third party instead of having to ask another laboratory to stop doing research and manufacture it for you. There’d be management systems that would join data from around the world, and you could use Google Maps API to flag brain images with comments. Scholarly literature would be available for free because the peer-review charges would be paid as part of the cost of research instead of through subscription models, and the annotations or comments that had been made on any given paper would be readily available. The idea is that we would do things in science that we already do everyday in other fields with ease. Science ought to be like this, but it isn’t.

How has the scientific community received the Science Commons idea?

We’re pretty pleased at how positive the response has been. It mostly comes from our focus on research. Every scientist would like to be able to move through research faster, to spend less time and money acquiring material or disseminating it. That said, it will be fascinating to see what happens when people have to start sharing their own stuff. Most of the focus in this area has been around copyrights and patents from the business context-incentives for taking the risk-and not on what makes science go faster. Changing the discussion to “how we make science go faster” allows us to bring in a lot of voices to the debate because we’re not making the simple argument that “intellectual-property rights are bad by default.”

In the past, you’ve noted that improving data-sharing among scientists may take more of a cultural shift than a legal one. What do you think it will take to achieve this?

Right now, it’s still in scientists’ interest to follow the classical model of one scientist working alone. In today’s system, you don’t get rewarded for sharing-no one gets tenure for choosing to publish preprints of their papers in molecular biology, or for spending weeks making cells for other labs to do research. And you sometimes get ahead by deliberately withholding. If you think you can squeeze more papers out of your data, you might not share it even if it takes years for someone else to replicate the research you’ve written about. Even if it’s not a matter of deliberately withholding, it takes a great deal of effort to share information with others once you’re through with it. It takes common standards to annotate data and databases to hold the data. It takes infrastructure to make sharing work. There’s no easy system in place.

How do you change things so that it’s in scientists’ best interest to share rather than withhold?

We can provide the wiring, but only people within the system can make the incentives. That’s why we’ve worked with funders from the beginning: They are the ones who can make an incentive for scientists to share, and they are also the ones for whom sharing is in their best interest. What’s the biggest impact for their investment in science? If the materials and data are easily accessible to more researchers, more can be accomplished. The Gates Foundation, for example, is now offering millions for malaria research, and it’s contingent on the researchers making it available to share. Sharing maximizes the return on investment in early-stage research. No pharmaceutical company is making money by selling biological knowledge-they make money by selling chemicals. So getting as much of that knowledge as possible into the efficiency of the Web-commerce world is going to make it faster to find those chemicals.

What about the journals? How can an open-access system be in their interest?

Admittedly, right now the traditional for-profit publishing companies don’t have a strong incentive to change. These publishers are making as much as a 35 percent profit, and in the absence of prodding from the scientific and research communities they’re not going to change. But over the long term, people will get frustrated that we can easily find everything we need recreationally online but we can’t do it for science. Imagine if Google couldn’t read pages on the Web-it would be hard for PageRank to do its magic. Well, that’s the situation in science. Google doesn’t work as well for finding science as it does for finding pizza, and that’s a shame. Open access isn’t just about getting a scientist access to a file. It’s the best thing for science because it allows all the smart people in the world to start hacking on the scientific literature and applying tools like text mining, collaborative filtering and more. Right now, all that content is basically dark to most of the smart people on Earth.

When that happens, journals will be forced to create a new business model to pay for peer review and layout. This is not uncommon-if you’ll recall, bookstores have had to deal with the impact of technology and the Web, but no one is calling for a payout for the little bookseller because Amazon is competing with them. Nature is at the forefront of this, implementing CC licenses for its revolutionary preprint archive, Nature Proceedings, but there are lots of possibilities out there-think of Amazon’s market partners. If a scientist is reading a paper online and clicks through to purchase material, there’s value there. It might be a business model; it might be enough to defray the cost of open access. I just want to create the infrastructure that makes movement and sharing easier. If we can build the wiring, everyone involved can experiment with the business models and we can let the markets work it out.

Will Science Commons benefit researchers in other countries?

Given that the focus of our project is on research and there aren’t many countries producing research at the rate of the U.S., America is probably the major recipient. But that said, it actually might create more value for someone in India than someone at MIT. The way materials transfer works now, if you read my article and want a tool I used, you have to come beg me for it and I have to spend significant time replicating it for you. So, by making the tools instantly accessible to anyone, we end up lowering barriers to scientists across the world.