Is America Headed for a Food Shortage?

A new study suggests that ethanol production could drive up corn prices, leaving U.S. grains and meat in short supply 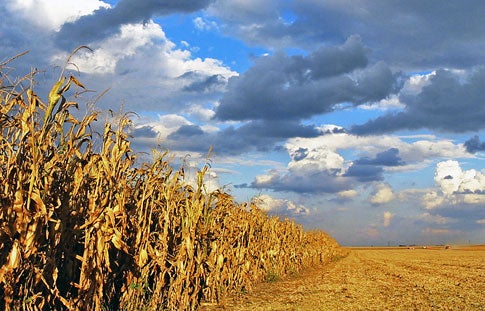 Ethanol is a renewable, homegrown fuel that can help lower U.S. dependence on foreign oil. But as more and more ethanol is made from corn, less and less corn is available for food production, and that´s causing some unforeseen problems.

Corn is a mainstay of American agriculture- it´s an important ingredient in cereals and baked goods, and corn syrup is used to make processed foods like candy, chips and soft drinks. But most importantly, corn is the major source of food for cattle, pigs, turkeys and chickens that are headed for the dinner table.

A recent study conducted by the Center for Agricultural and Rural Development at Iowa State University (which receives funding from grocery manufacturers and livestock producers) reported that U.S. ethanol production could consume more than half of U.S. corn, wheat and coarse grains by 2012, driving up food prices and causing shortages. The study estimates that booming ethanol production has already raised U.S. food prices by $47 per person annually. In Mexico, protests have already erupted over the high price of corn tortillas, a staple food in the local diet.

Planting more corn is one solution, but that means planting less of other crops that are also widely used in foods, such as soybeans and wheat. Tilling fallow land could create more growing space for corn, but might lead to soil erosion and impacts on wildlife habitats.

According to a December 2006 study by the International Food Policy Research Institute, producing enough ethanol to fuel all of the world´s vehicles would require five times more corn than is planted today and 15 times as much sugar cane.

A more promising solution is to make ethanol from cellulose instead of starches and sugars-using plants such as switchgrass and organic waste instead of corn and sugarcane. This would also reduce greenhouse gas emissions much more effectively than making ethanol from corn.

Growing switchgrass in large quantities would probably require taking some other crops out of production, which would create challenges for farmers. The more attractive alternative is to make ethanol from waste materials such as leftovers from logging and paper mills. However, cellulosic ethanol is not expected to become economically competitive with corn-based ethanol until scientists can develop enzymes that are more efficient at breaking down woody plants. The federal government is funding research aimed at making cellulosic ethanol commercially viable, but many technical issues still need to be worked out.

For now, whether corn is used to make food or fuel depends on economic factors such as the fluctuating price of oil. When oil prices are high, demand for ethanol goes up. That helps keep your costs down at the pump, but you may pay more for steak and corn chips.

Could a boom in corn-based ethanol mean trouble for our favorite beverages as well? Find out on the_ PopSci_ blog