Tiny Clues from a “Gentle Drowning”

The killing of a young child led investigators to this problem: Can the single-celled life in water tell where the water is from? 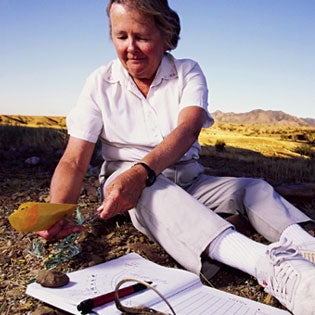 Investigators with the California Highway Patrol found the body of a 15-month-old toddler bobbing on the surface of Bear Creek in Merced in May 2002. The pitiful discovery followed by a few hours a 911 call from a local resident on behalf of the child’s teenage mother. The girl claimed she’d been standing at a park fountain, at around 9:45 p.m., when a man grabbed the stroller her toddler was sitting in and ran into the darkness. She gave chase, she said, until her sides hurt.

There was something odd about the body. “When I went out to the scene that night,” recalls forensic pathologist James Wilkerson IV, “I thought it unusual that the baby was still floating. In your typical drowning, the
victim thrashes around and sinks.”

The autopsy increased his suspicions. “There wasn’t as much water in the stomach as I normally see. It looked like what I call a gentle drowning.” Meanwhile, the child’s mother was giving tearful press conferences, urging police to catch the brutal killer.

On a hunch, Wilkerson sent the police back to collect water samples from both the fountain pool where the girl said her baby was snatched and the creek where the body was found. The Merced police department sent the samples, along with water removed from the baby’s stomach, to the state crime lab, to see if workers there could make a match that would reveal whether the baby had drowned, and if so, where. The technologists drew a blank. Wilkerson then posted a plea for help on the listserv of the National Association of Medical Examiners. A subscriber offered the phone number of a University of Colorado at Boulder plant ecologist named Jane Bock.

With CU-Boulder physiologist David Norris, Bock has spent the past 15 years creating a bizarre subspecialty within the already obscure crime science of forensic botany. Though the acidic soup of the human stomach quickly turns animal cells (i.e., meat) to mush, the rigid cellulose wall of a plant cell remains intact in the gut. Indeed, archaeologists and paleontologists have long used the residue of indigestible bits of fruit and vegetables in coprolites (fossilized feces) to study the diet of prehistoric people and animals.

Bock and Norris’s first homicide case hinged on their determination that a victim’s last meal had not been a lunch shared at McDonald’s with her boyfriend (burger with onions and pickles), but one that included more vegetables. That led police to the salad bar of a local Wendy’s, where a waitress had seen the woman leave with another man after dinner.

Relatively straightforward forensic work, except that, before Bock and Norris, no one in forensic science had bothered to catalog what plant cells look like after they’re siphoned, half-digested, from a human stomach. Plant anatomy textbooks showed a smattering of intact cells, including a few from food plants such as onions and potatoes. But history left it to Bock and Norris’s students to chew their way through the produce section of a local supermarket and smear the masticated pulp across one microscope slide after another to create a reference set. (Well-chewed plant matter closely resembles that found in stomachs.)

In 1983 the National Institute of Justice put up the funds for the two professors to publish a slim volume of photos?a botanical field guide to the pathologist’s garden. Among its eerily beautiful micrographs: the sharp-angled, stone-like cells that identify a bite of pear, the amoeba-like oil droplets of a chewed olive, and the pouting, oversized pores of a spinach leaf.

Bock and Norris hoped their limited edition would encourage American pathologists to make their own identifications. Instead, it brought a stream of new deliveries to their laboratory: vials of stomach contents removed at autopsy, swatches of clothing and bedding encrusted with vomit.

As to the Merced toddler murder: Would it be a far reach, Wilkerson asked Bock, to analyze not vegetables but water from a drowned child’s stomach? “We immediately saw the potential,” says Bock. Just as plants colonize land, algae thrive in aquatic environments. Kelp is a familiar, macroscopic example of this plant-like group. Even more ubiquitous are the glassy, one-celled algae known as diatoms.

Bock photographed the water samples under a microscope. Each drop brimmed with scores of diatom species?each with its own jewel-like shape and intricately ornamented cell wall. It didn’t take long to determine that the toddler’s stomach contained water from both fountain and stream.

The implication: The child had been held underwater in the fountain pool before being tossed?dead or nearly so?into Bear Creek. Told of the finding, the teenage mother confessed.

Success stories only increase the consulting burden for Bock and Norris, but the analysis of gastric contents is just one of botany’s many forensic applications. Though forensic botany remains a rare specialty in this country, its practitioners have located hidden graves by recognizing signs of disturbed plant growth, pinpointed the geographic location of kidnap victims from the background foliage in photographs, used shreds of plant evidence to place suspects at the scene of a crime, and estimated time of death by determining the age of weeds growing among human remains. Yet botany remains below the radar of most forensic investigators.

“It’s frustrating,” says Bock. “Every forensic lab should have someone with the basic training to make sense of botanical evidence. After all, it’s cheap, it’s easy, and all you need, for the most part, is an ordinary light microscope.”

Perhaps plant work is too low-tech in an age that glorifies computer analysis and DNA fingerprinting. Bug-focused forensic entomologists at least have the creepiness factor going for them: The more nauseating episodes of CSI have popularized the idea of using maggots as evidence. Then again, Court TV recently approached Bock about dramatizing one of her more sensational cases. She and Norris are also hammering out the early chapters of their field’s first handbook, Forensic Botany.

Meanwhile, perhaps the National Institute of Justice would do well to publicize the importance of eating veggies at every meal. Some of us will live longer; others might at least point a green finger, from the autopsy table, at our killers.