Thrilling Wonder, This Weekend In New York and London

Since 2009, an annual Thrilling Wonder Stories event has taken place at the Architectural Association in London, bringing people together... 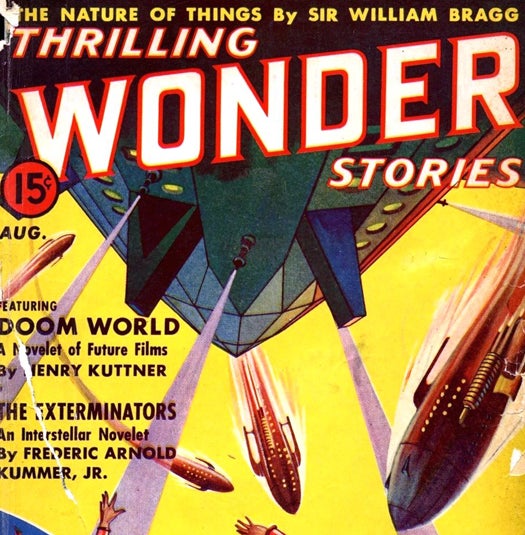 Since 2009, an annual Thrilling Wonder Stories event has taken place at the Architectural Association in London, bringing people together from multiple disciplines to explore the spaces between fiction, science, and design.

This year, we’re teaming with the Architectural Association and Studio-X NYC for Thrilling Wonder Stories 3.

This Friday, October 28th, at Studio-X NYC (which is at 180 Varick Street), Thrilling Wonder Stories 3 will kick off at 1pm New York time, lasting till 4 or 4:30pm. Speaking that day are:

Novelist and author of Gods Without Men, Transmission, and The Impressionist

Architect, WSJ Magazine 2011 architectural innovator of the year, and author of Yes Is More: An Archicomic on Architectural Evolution

Nettle’s new album, El Resplandor, is a speculative soundtrack for an unmade remake of The Shining, set in a luxury hotel in Dubai

Historian and author of Fixing The Sky: The Checkered History of Weather and Climate Control

Science writer for the Washington Post and author of First Contact: Scientific Breakthroughs in the Hunt for Life Beyond Earth

Journalist and author of Tubes: A Journey to the Center of the Internet

Architect and co-director of The Living

Researcher and educator in biological materials and engineering design, featured in Wired UK‘s 2010 “Year In Ideas”

Researcher in evolutionary robotics and the future of 3D printing

Architect, winner of the 2011 Animal Architecture Awards, and author of Organs Everywhere

The events in New York will be moderated by Studio-X NYC co-director Nicola Twilley and PopSci senior associate editor Ryan Bradley. In both locations, events are free and open to the public; however, if you plan on attending the Studio-X NYC event, please register as limited space will be available. Here’s a map.

Meanwhile, in London, it’s an all day blow-out on Friday, lasting from noon to 10pm, featuring:

Director of Cube, Splice, and forthcoming feature films based on J.G. Ballard’s High-Rise and Neuromancer by William Gibson

Game designer and theorist of “how algorithms shape our world“

Concept artist and illustrator for computer games and films such as The Matrix, Dark City, The Fifth Element, and Superman Returns

Designer, technologist, and researcher at the Los Angeles-based Near Future Laboratory

Music, composition, and sound design for film and television

Matt Jones of the ultra-talented design studio BERG will join Liam Young to serve as co-host for the day.

Here’s a map for how to get there; the event is free but space is limited.

If you can’t make it in person, find posts on PopSci.com and follow Thrilling Wonder Stories on Twitter.