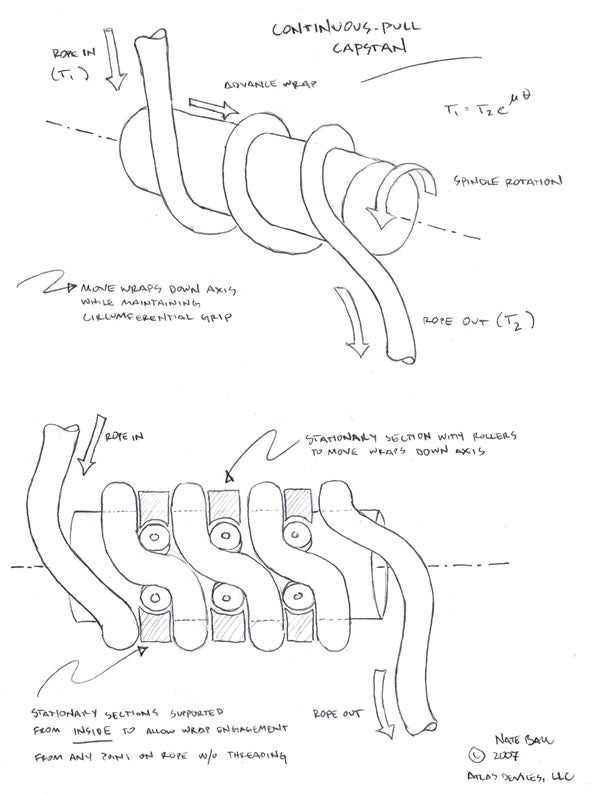 In this design, the rider wraps the rope around a motor-driven spindle. As the spindle turns, the rope pulls tight around it, preventing the rope from slipping, while small wheels guide it through.

The week, we’re rolling out the winners of the 2007_ PopSci_ Invention Awards. We’ll be doling out a new innovation each day for the next few weeks, so keep checking back for more of what the world’s brightest inventors are currently cooking up. And if you just can’t wait, pick up a copy of the June issue that just hit the stands.-Eds.

For a video of the Atlas Ascender in action, click here

Tim Fofonoff, a 31-year-old grad student at the Massachusetts Institute of Technology, stands at the base of a 50-foot-tall, graffiti-covered rock wall just south of Boston. He´s clipped into the Atlas Powered Rope Ascender, a toaster-size battery-driven device that he and his three co-inventors built themselves. With it, he´s about to do something no one outside of a Hollywood script has done before: rappel up a wall at an astonishing 10 feet per second. He stares hesitantly for a moment at the craggy rock face, presses a small button, and darts off the ground as if he were wearing a cape. Halfway up, he lets go of the button and stops, dangling, a little out of breath-it´s been awhile since his last test, and he´s forgotten what it´s like to fly.

Until now, no one has been able to build a machine that´s powerful enough to whisk a man up a rope and small enough to throw in a backpack. But the Atlas is real, and real people are begging Fofonoff´s team for one of their own. An avalanche-rescue company wants to pluck stranded skiers out of the snow. A botanist imagines speeding to the tops of old-growth redwoods. The U.S. Army has placed several orders as well. Major Rex Blair, a former company commander for a tank battalion in Iraq who has come to watch the test, talks about using the Atlas to zip in and out of terrorist-harboring caves or evacuate casualties from city streets by yanking them to rooftops. â€If you give this to soldiers, they´re going to find uses for it that no one´s thought of,â€ Blair says.

The inventors came together to build the first Atlas in 2004 as part of an annual military-gear-invention contest at MIT called the Soldier Design Competition. Fofonoff and 24-year-old Nate Ball are the design leaders; Dan Walker, also 24, brings climbing expertise; and Bryan Schmid, 25, is the machining pro. They built the model Fofonoff holds, their latest and lightest, in just a few days.

The heart of the 20-pound device is a motorized rope-winding
mechanism-a wheel with a V-shaped, grooved channel that holds the rope snugly. But what makes it possible is the smart selection of compact and powerful parts. â€Until recently, it just wouldn´t have been small enough,â€ Fofonoff says. The team tracked down an MIT professor who founded a company that produces high-capacity lithium-ion batteries, and Ball, the gearhead, scrounged up superstrong electric motors. â€It has a greater power-to-weight ratio than a Dodge Viper,â€ he boasts.

The group´s first two customers-the Army and a company that will use it for building maintenance-will get an ingenious device that´s also incredibly easy to master. After a few more turns, Fofonoff is rocketing up the wall with ease, looking as confident as secret agent Ethan Hunt-disguised as an engineer.