A Toast to the Bionic Man 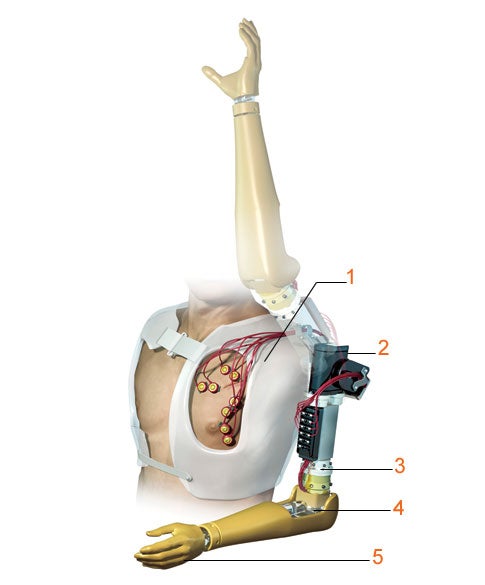 The plotline is classic Marvel Comics fare: An electrician grabs a high-tension wire carrying 7,000 volts of electricity, loses both arms at the shoulder, undergoes an experimental surgery, and emerges bionic. Sci-fi as it sounds, this is the story of Jesse Sullivan, 58, a real-life retired linesman from Dayton, Tennessee.

In July, Sullivan demonstrated the world’s most advanced robotic arm, using his thoughts alone to maneuver it. Before an audience at the Rehabilitation Institute of Chicago he picked up a water bottle, took a swig, and set it back down. “Jesse was awesome,” says Todd Kuiken, director of RIC’s amputee program, who pioneered the radical nerve-transfer surgery that allows Sullivan to communicate with the limb. Kuiken also engineered the new limb’s design.

The performance marked a major breakthrough in prosthetic-limb technology. Many prostheses in use today are mechanical hook-and-wire contraptions. The debut of the computerized limb in 2001 offered new hope, but until now it has been unable to process brain signals directly. Instead the wearer uses his body-the shoulder nub, for instance-to manually press electrical switches placed at the amputation site, enabling just a single motion.

Kuiken’s prototype, a six-motor machine with a 64-bit computer embedded in the forearm, is the first brain-controlled prosthesis to move simultaneously at the shoulder, elbow and wrist. It’s also the first to enable the wearer to sense pressure. “I actually feel my hand open and close,” Sullivan says. “It feels sort of like squeezing a tennis ball.”

For now, Sullivan relies on an older model while Kuiken tweaks the new one. “Jesse broke 12 stainless-steel bolts on the earlier model trying to pull-start a lawn mower,” Kuiken says. “If I let him take the prototype home, it would be toast in minutes. We still need to make it stronger.”

1. THE SURGERY
Doctors rewired four nerves that once connected to Jesse Sullivan’s arm and transferred them to his chest muscles. Brain signals fire the nerves and trigger electrodes affixed to his chest. A computer converts the data into action.

2. THE SHOULDER
The world’s only motorized shoulder is made of aluminum and carbon fiber and weighs 1.8 pounds. A 14.8-volt lithium-ion battery drives a motor and gearbox.

3. THE HUMORAL ROTATOR
This one-motor joint enables Sullivan to move his forearm close to his midline, simplifying tasks such as buttoning a shirt.

4. THE CONTROL UNIT
A 64-bit microprocessor embedded in the forearm coordinates movement of five motorized joints.

5. THE HAND
Hailing from Shanghai, the hand is the only such device to feature a flexible, motorized wrist. Fingertip sensors enable pressure sensation.