The Worst Way to Inlay

Sulfur is stinky and noxious, but that didn't stop people from using it to beautify their furniture 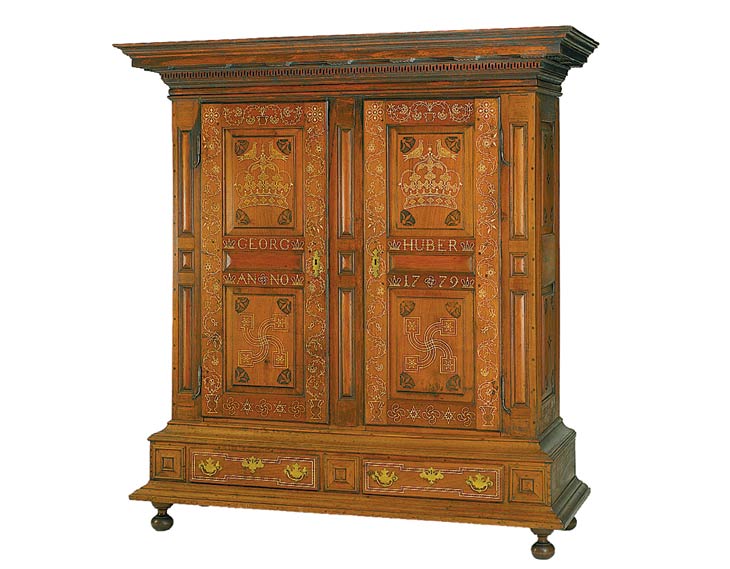 by Philadelphia Museum of Art

Creating inlaid wood furniture is a painstaking process. Cutting shapes into the front of a drawer isn’t the hard part, though; it’s crafting pieces of a contrasting wood that fit precisely into those spaces. Since the beginning of furniture making, people have been looking for shortcuts. Today, machine-cut inlays are available, but in the past the preferred approach was to fill the patterns with a paste that would harden in place.

One of the less inspired ideas came in the late 1700s, when someone started pouring molten sulfur into his carvings. In the Philadelphia Museum of Art, you will find a spectacularly detailed and beautiful chest made in 1779 in Pennsylvania by a pair of Swiss craftsmen, members of a short-lived tradition of sulfur-inlay furniture making.

Though sulfur may have had a good case on paper–it melts easily and hardens to a pretty yellow–there’s good reason the
tradition was short-lived: Sulfur is nasty at a biblical level, it being another name for the brimstone with which evil was said to be
punished. If you heat powdered sulfur gently, it melts into an amber-colored liquid that can easily be poured into complex shapes,
if you can stand the suffocating fumes–and if it doesn’t catch fire spontaneously, as it will at a temperature somewhat higher than
its melting point, burning with the loveliest purple flame.

The fumes are sulfur dioxide, best known as one of the components of smog. Being near a pot of molten sulfur, it rapidly becomes difficult to breathe. If you want to find out what asthma feels like, doing sulfur inlay is probably a decent approximation (and if you have asthma, you should never be around sulfur dioxide fumes, as they can trigger a severe attack). This is not something you want to do in the house, especially if you want to continue living in that particular house. Oh, and after you work with sulfur for a while, it reacts with the bacteria on your hands and forms hydrogen sulfide, giving you the smell of rotten eggs.

After filling the grooves, the sulfur cools rapidly to a crystalline solid that can be planed, chiseled and sanded smooth, resulting in a golden yellow inlay. It will turn white after a century or so as the sulfur ages. Bubbles and gaps are the primary way to identify an antique pure sulfur inlay, so when I tried this myself (in the name of historical investigation, of course), I didn’t go out of my way to fix them.
This is, after all, meant to be
a quick-and-dirty method.

Take my word for it, there are few materials less pleasant to work with than sulfur. Resins, paints, chalk paste, plastic–all have been used to do furniture inlay with success. No one knows why sulfur was first used, but it’s clear to me why
it isn’t anymore.

Thanks to Mark Anderson and Jennifer Mass of Delaware’s
Winterthur Museum for the historical and scientific information about sulfur inlay.