Geologists: We’re not ready for volcanoes

A new study highlights the importance of preparing for catastrophic volcanic eruptions. 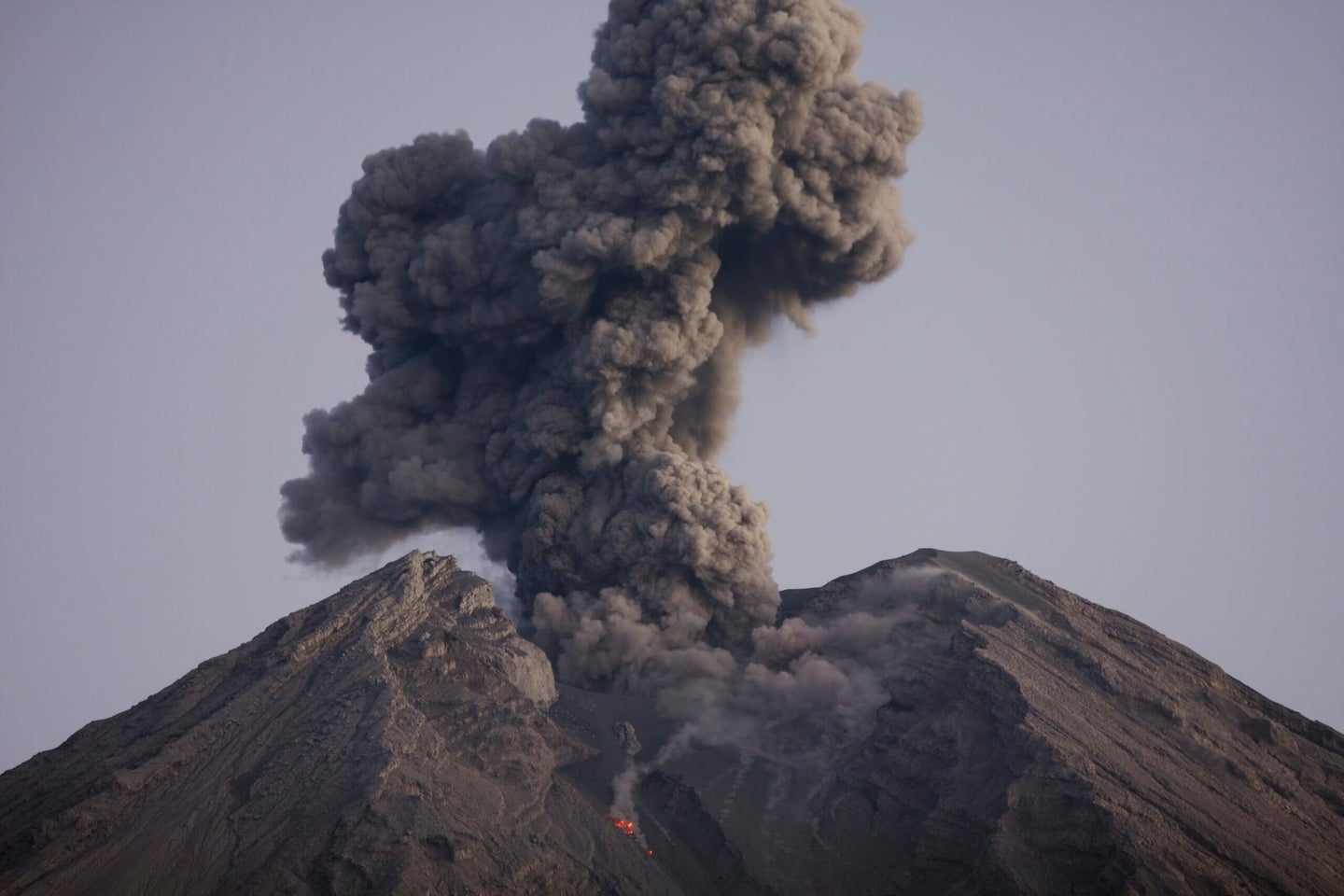 A cloud of deadly volcanic ash spews from a volcano. Deposit Photos
SHARE

Humans have marveled at the awesome power of volcanoes for centuries. Earlier this month, tourists flocked to Iceland to see lava flowing from a fissure eruption on the Reykjanes peninsula. The so-called “land of fire and ice” saw a huge burst in tourism following the eruption of Eyjafjallajökull in 2010.

Despite their magnetic-like pull, volcanic eruptions are a big threat to humanity. A study released yesterday in Nature from the University of Cambridge’s Centre for the Study of Existential Risk (CSER) and the University of Birmingham found that there is a general misconception of the lethal threat volcanoes pose to society and planet Earth at large. According to authors Michael Cassidy and Laura Mani, this misconception has led to a general apathy about preparing for a major eruption, despite it posing a greater risk than an asteroid strike.

January’s eruption of the Hunga Tonga–Hunga Haʻapai volcano in Tonga was the largest explosion recorded by instruments. Ash was dumped over hundreds of miles of land and sea, affecting everything from infrastructure to fish stocks. The eruption damaged 36.4 percent of Tonga’s gross domestic product, according to the World Bank. The severing of submarine cables cut off the nation in the southern Pacific Ocean’s communication with the outside world for a full month. It blasted enough water into fill 58,000 Olympic-sized swimming pools into the stratosphere and a shockwave sent tsunamis to the Japanese and North and South American coastlines. All of this devastation was caused by an eruption that lasted only 11 hours. Had it gone one longer, the repercussions on the climate, food resources, and other infrastructure would have been catastrophic.

“The Tonga eruption was the volcanic equivalent of an asteroid just missing the Earth, and needs to be treated as a wake-up call,” wrote Mani.

This threat isn’t going away. The eruptions are more prevalent than researchers previously believed. Recent data from ice cores (long cylinders of glacial ice uncovered by drilling into a glacier or mountain) shows that an eruption 10 to 100 times larger than the one in Tonga occurs once every 625 years, or twice as often as had been previously thought. These events are categorized on the Volcanic Explosivity Index (VEI) that measures the explosiveness of volcanoes.

The world hasn’t seen a magnitude-7 event since the eruption of Indonesia’s Mount Tambora in 1815. In the archipelago, an estimated 100,000 people lost their lives from volcanic flows, tsunamis, damage from massive rocks, ash destroying crops and homes, and additional collateral damages. Globally, temperatures dropped as much as three degrees Fahrenheit, triggering what scientists and historians call the Year Without a Summer and major societal effects. Mass crop failures led to famine which led to uprisings and epidemics.

According to the Centers for Disease Control and Prevention (CDC), those living in the face of any active volcano should evacuate if told to, shelter in place by sealing all doors and windows, and maintaining a disaster supply kit. On a more macro level, the study’s authors stress the importance of real-time targeted communication of ash fallout, gas plumes, and volcanic flows. They post that quicker messaging (preferably through text messages) could better prepare communities and to help in disaster relief.

The authors cite The Volcano Ready Communities Project in Saint Vincent and the Grenadines as a recent success story. The project evacuated 22,000 people ahead of an eruption in April 2021.

To best prevent more catastrophe, CSER calls for increased research into volcano “geoengineering,” including includes the studying of countering aerosols released by a massive eruption. These tiny particles can block out the sun and lead to a “volcanic winter.” CSER also encourages more debate on whether or not to investigate how to manipulate the pockets of magma beneath active volcanoes.

“Directly affecting volcanic behavior may seem inconceivable, but so did the deflection of asteroids until the formation of the NASA Planetary Defense Coordination Office in 2016,” wrote Mani. “The risks of a massive eruption that devastates global society is significant. The current underinvestment in responding to this risk is simply reckless.”