The gem acted like a capsule, returning a sample from the planet's mantle. 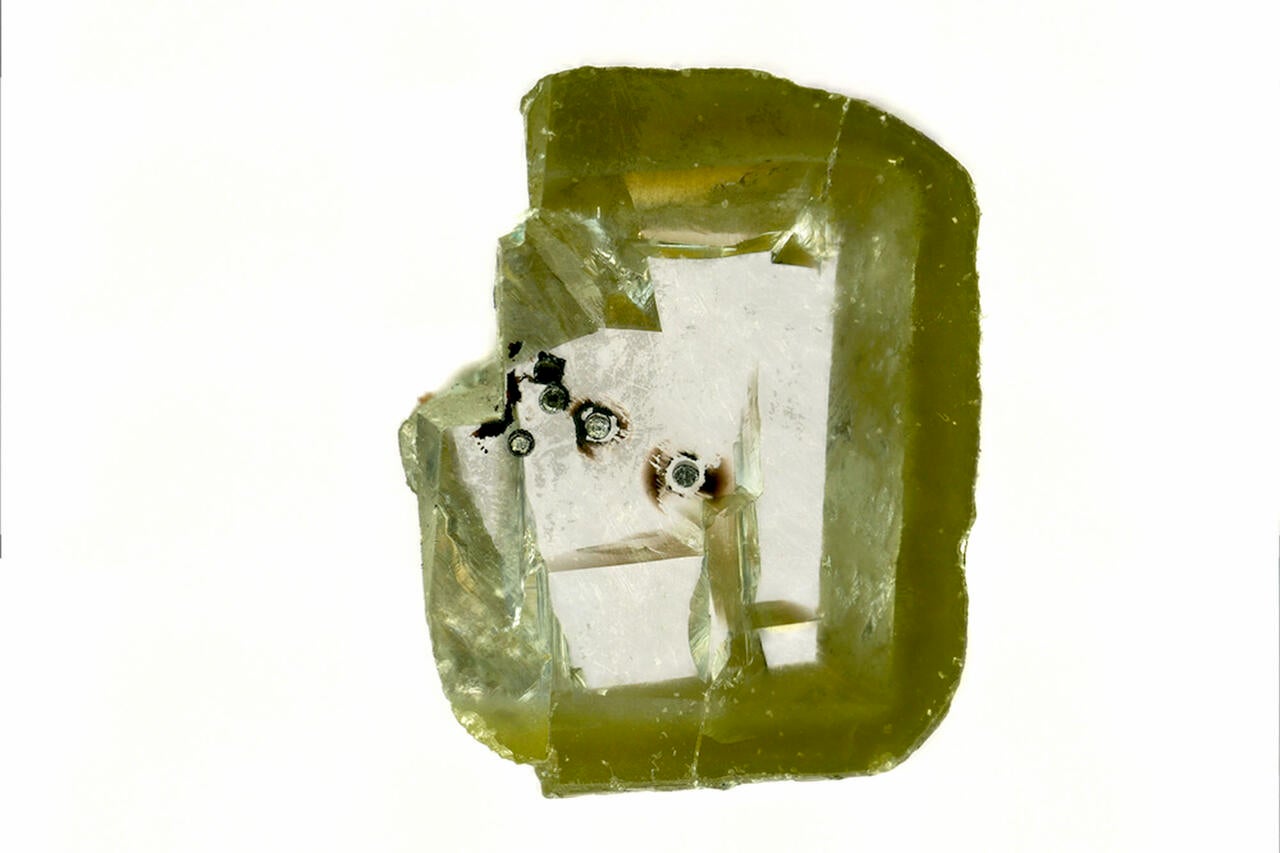 Miners digging for diamonds in the 1980s in Botswana’s Orapa mine, one of the biggest diamond mines by area, found what was to them a disappointing discovery: A greenish octahedral-shaped diamond marred with little black specks trapped inside.

But to geologists decades later, those black specks are a treasure rarer than the diamond itself. Using X-ray analysis and mass spectroscopy, geologists and physicists confirmed that the jewel’s imperfections are bits of mineral from the Earth’s lower mantle—a substance that has never been identified in a natural sample before. The mineral usually only exists in extreme high pressures and temperatures, and this particular sample likely formed between 410 and 560 miles below the Earth’s surface, making the stone a “super-deep” diamond. But these flecks were embedded in a diamond strong enough to make its way up to the surface fully intact. The findings were published last week in Science.

“For jewelers and buyers, the size, color, and clarity of a diamond all matter, and inclusions—those black specks that annoy the jeweler—for us, they’re a gift,” lead author Oliver Tschauner, a geochemist at the University of Nevada, Las Vegas, said in a statement.

The mineral, calcium silicate perovskite, matches what previous researchers have been able to synthesize in labs. But making the mineral requires 20 gigapascals of pressure (almost 200,000 times atmospheric pressure), and it breaks down as soon as it’s removed from an artificial high-pressure environment. Scientists therefore have long assumed that it would be impossible to find a sample of the mineral in nature.

[Related: How minerals and rocks reflect rainbows, glow in the dark, and otherwise blow your mind]

“The chances, we thought, of finding it were so low that we never really actively looked for it,” Tschauner told Scientific American. So “having the real minerals from the lower mantle still present is a fairly new direction for this type of research.”

Inside the casing of the diamond, the mineral is sealed within a rigid structure, maintaining enough pressure to stay in its natural form. But “when we broke open the diamond, the [mineral] stayed intact for about a second, then we saw it expand and bulge under the microscope and basically turn into glass,” Tschauner told New Scientist. The seal was broken, and the mineral couldn’t hold together.

Tschauner, reporting the first official discovery of the new mineral, was also allowed to name it. He dubbed it “davemaoite,”after geologist Ho-Kwang “Dave” Mao, who pioneered some of the very experiments that allow scientists to generate mantle-like pressures on the earth’s surface.

Davemaoite is one of three main minerals in Earth’s lower mantle, making up an estimated 5 to 7 percent of the material there, Tschauner told Nature. It is an important part of Earth’s structure because it can host elements like uranium and thorium, producing heat as it aids their radioactive decay.

Although there is much more to be potentially learned from these minerals, the issue is finding those rare natural samples. Hunting for super-deep diamonds is a taxing process, and geochemists say there are no easy ways to know where diamonds from the deep might emerge.