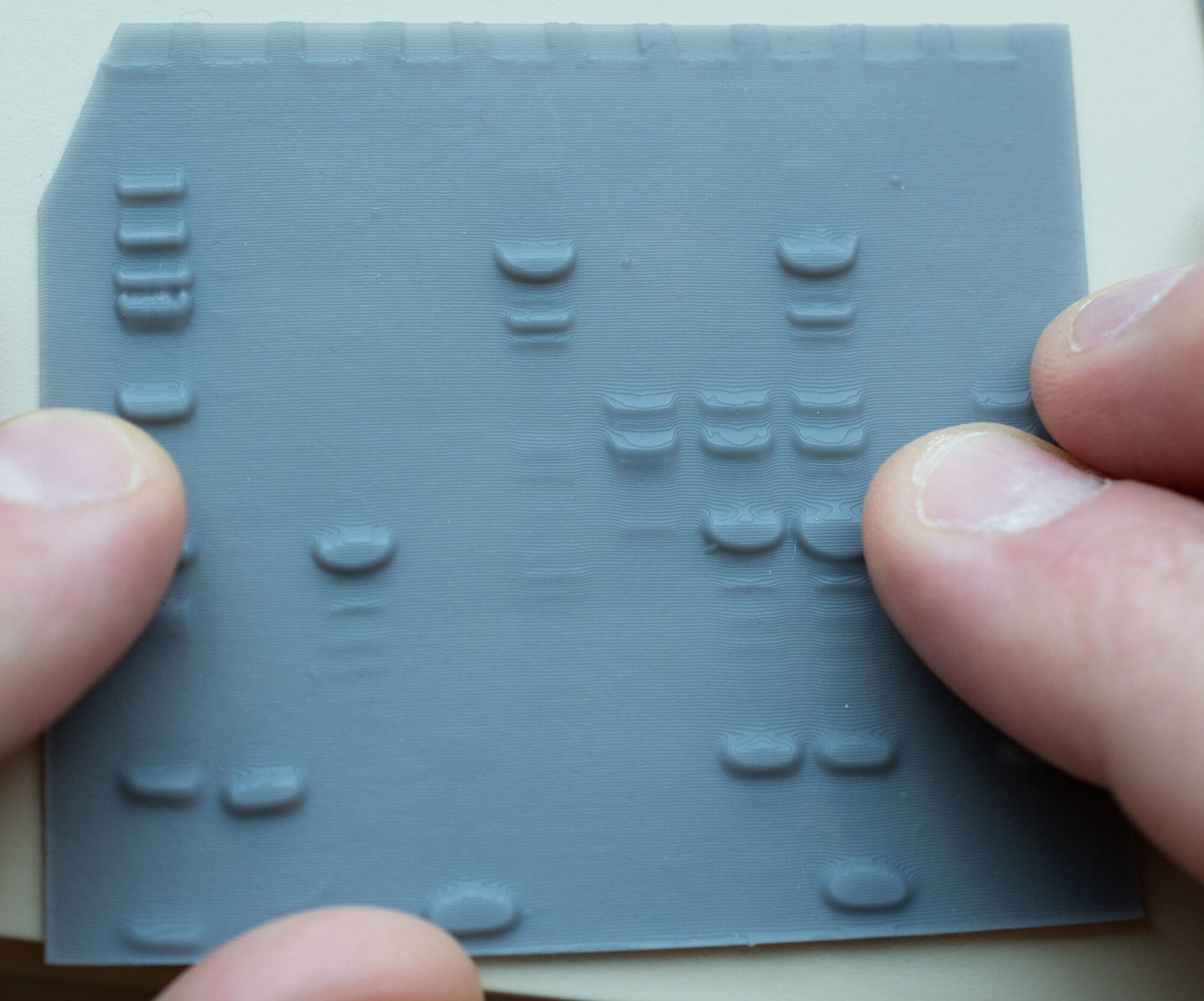 A lithophane of an SDS-PAGE gel, a laboratory technique to study proteins. Jordan Koone and Bryan Shaw
SHARE

Before photography, there was the lithophane.

It’s a thin slice of porcelain or plastic, adorned with a shallow engraving. Hold it up to a light, and the translucent relief turns into a shadowy image. Europeans first began making lithophanes around 1800, though East Asians had been doing similar tricks with ceramics centuries earlier. For a time, artisans and primitive factories pumped out lithophane nightlights, lampshades, and drinking vessels. Even lithophane portraits were once fashionable.

Lithophanes haven’t entirely vanished from the modern world. Today, you might find them as fun decorations or 3D printing tutorials. Now, the fact that lithophanes can play dual roles as picture and engraving has given them a new purpose: making science more tangible for those with vision difficulties.

Scientists at Baylor University, teaming up with blind chemists from around the US, have turned to lithophanes as a way to bridge those chemists with their sighted counterparts. The scientists have publicized the concept in a paper published in the journal Science Advances on August 17.

“Just imagine a world in which a blind person and a sighted person are sitting next to each other, referring to the same piece of data, and accessible to both,” says Mona Minkara, a blind chemist at Northeastern University, and one of the paper authors. “This could be revolutionary, if people incorporate it.”

It’s certainly an improvement over what exists today. If you’ve ever seen a scientific paper, you probably know that graphs, plots, and visuals can be critical to understanding the dense and jargon-heavy text. If you’re a blind reader, you can turn the text into audio with the aid of software, but what about the pictures themselves?

“There’s hundreds of PDFs of scientific articles that I download, and none of the figures are accessible,” says Matthew Guberman-Pfeffer, a blind postdoctoral researcher at Yale University and the National Institutes of Health, and another of the paper authors.

It’s not that there aren’t methods of doing it. Some digital images have alt text describing them, but that can be frustratingly uncommon. You can make touchable images, but they require costly special paper. You can get bespoke braille books, but they can cost tens of thousands of dollars, or even more, and take a literal year to assemble.

It’s ironic that these barriers exist in chemistry: a field that deals with atoms and molecules that are too small to physically see with your eyes—even if you shrunk yourself down to their size, because they’re smaller than the wavelength of visible light.

[Related: Why chemists are watching light destroy tiny airborne particles from within]

“One of the things I like to think about in terms of chemistry is that: Really, we are all blind,” says Hoby Wedler, a blind chemist, and another of the paper authors. The visual aids chemists use—everything from the periodic table to models of molecules to X-ray crystallography images—are no more than that.

One scientist working to chip away at the barriers was Bryan Shaw, a sighted chemist at Baylor University. Shaw has long been interested in making chemistry more accessible to the visually impaired by revamping laboratory equipment and turning models of complex molecules into tasty edible sweets.

One of Shaw’s students had been tinkering with engraving graphics into 3D-printed slabs. To save on material and time, they started making those slabs thinner and thinner. When they held the slimmest up to the light, the engraved graphs popped out to them just as starkly as it had in the original image.

What makes these creations special is that the carving a blind person can feel turns into a visible image when a sighted person holds it up to the light. To test that quality, the researchers created lithophane graphics—a few types of images and graphs common in chemistry—and showed them to test subjects (both blind and sighted) Then, the researchers asked them questions about the visuals.

“Having one thing that satisfies both populations is really, I think…the really exciting part of this work,” says Gary Patti, a sighted chemist at Washington University in St Louis who wasn’t involved with the work.

Moreover, unlike the expensive materials other accessibility methods use, these lithophanes came from a 3D printer that cost just $3,500. While expensive compared to at-home printers, that’s within the reach of many university computer labs.

“A lot of times, we think about making things accessible to blind students,” says Minkara. “But this technology could be really useful for me, as a blind professor, to be able to communicate with my students…and share data.”

Admittedly, the technology isn’t quite as accessible as it needs to be. Most urgently, the process of turning these graphics from digital images into lithophanes still needs the eyes of a sighted person. Building the software that would allow visually impaired scientists to do it themselves, researchers say, is the next step.

Even though chemists made these lithophanes for other chemists, they believe that any field that relies on plots and graphs—in other words, virtually all of science—could use them. “We’ve already started thinking about different types of data that other scientists use,” says Chad Dashnaw, a grad student at Baylor University and one of the paper authors.

The lithophanes created for this study included a microscope image of the scales on a butterfly wing. “I would never, with my limited sight, be able to see a butterfly wing,” says Guberman-Pfeffer. “And yet I could feel the texture of the wing and measure its dimensions.”