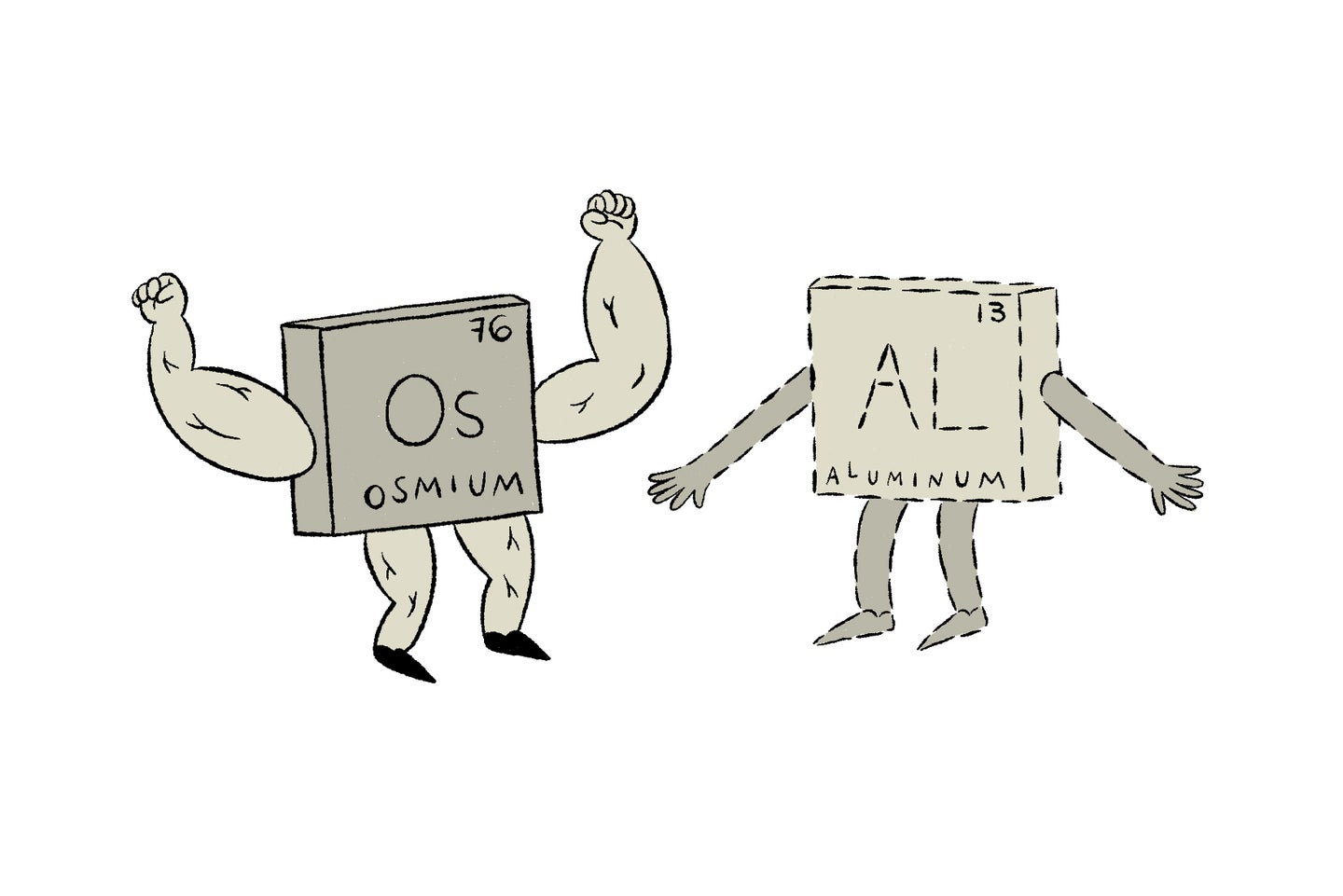 These are some of the most notable substances on the periodic table.

AS A HARD, shiny, and tough-to-melt bunch, metals are desirable as jewelry, commodities, and occasionally nutrients. Despite their common characteristics, many of them boast unique abilities. Let’s take a tour of some of the most extreme substances on the periodic table.

Element No. 76 is the heavyweight champion of Earth’s natural materials. It’s twice as dense as lead and has a jam-packed atomic structure and strong bonds that allow it to cram molecules together. Durable and stiffer than diamond, osmium makes for excellent pen nibs and record player needles.

The world’s rarest—and unsurprisingly priciest—nonradioactive metal accounts for less than one part per 200 million of the planet’s crust and can cost up to 18 times as much as platinum. Each year, 66,000 pounds of No. 45 get turned into catalytic converters and coatings for electrical parts.

No. 79 sculpts easily without breaking. Estimates hold that a single ounce of gold can be hammered into a sheet thin enough to span 100 square feet. In fact, jewelers often tap an alloy of nickel, silver, and other metals to increase their creations’ sturdiness.

Squeeze No. 1 with more than a million times the pressure of Earth’s atmosphere, and it might transform into quantum matter. The reward for all that toil is something part liquid, part solid that has zero electrical resistance at room temperature—making it a superconductor. Physicists have yet to conclusively create metallic hydrogen, though they predict it exists deep inside gas giants such as Jupiter.

In the craggy landscape of southern Turkey’s Mount Chimaera, an underground cache of No. 44 feeds dozens of 2-foot-high fires that have been burning for millennia. Experiments suggest that the metal helps convert carbon dioxide in the rocks into methane gas, creating endless fuel for the flames.

Make any material slender enough, and it will be see-through. Without that cheat, metals are generally not transparent—but element No. 13 is a neat exception. Hit it with powerful enough X-rays, and the silvery foil will let ultraviolet radiation pass through it for 40 quadrillionths of a second.