Why beer serving sizes are so weird

The math is kind of medieval. 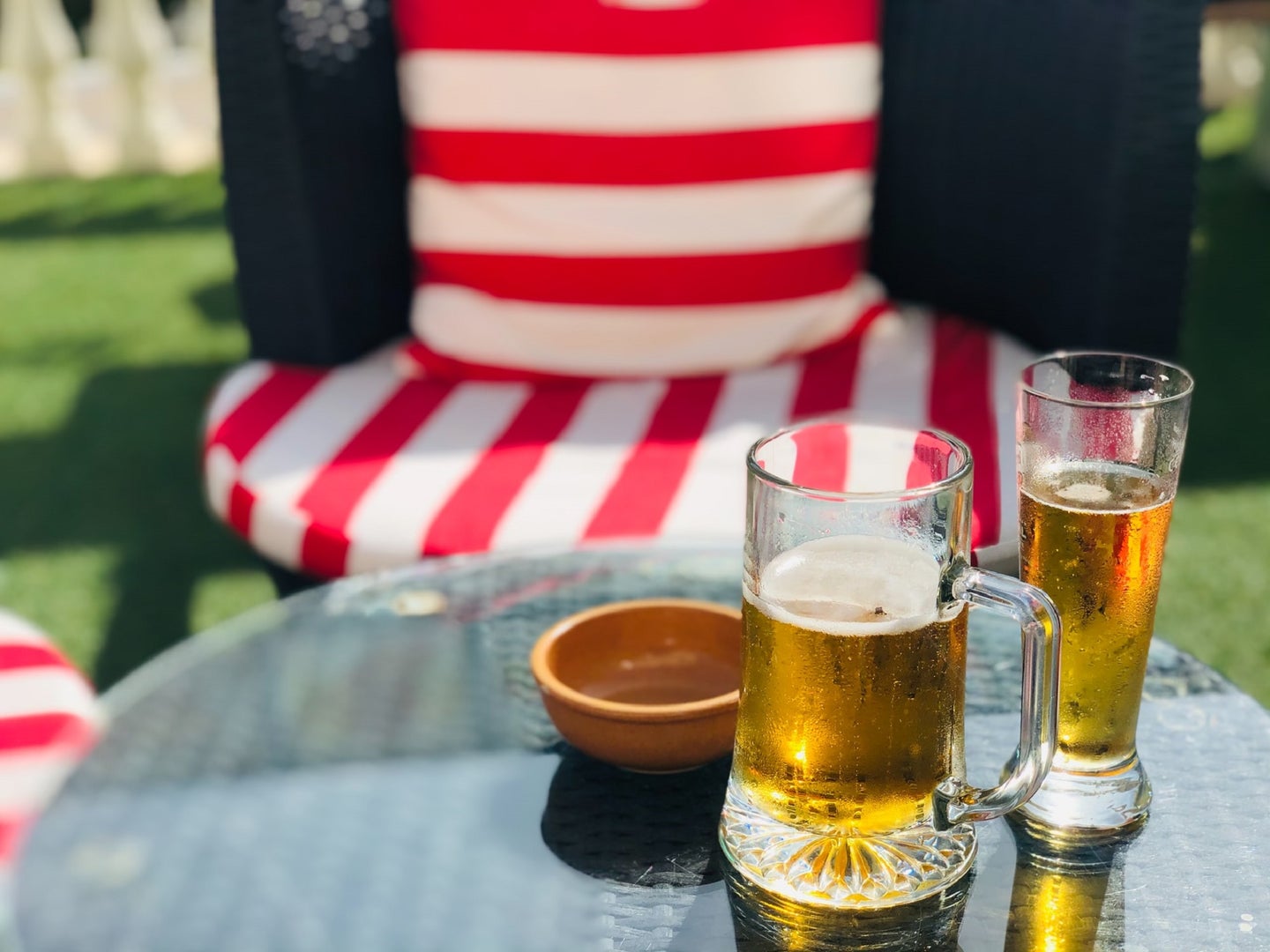 A pint of beer is not the same wherever you go. Cristiano Pinto/Unsplash
SHARE

We know what that means. It’s not about wanting “some beer”—sure, some beer is nice, but you know what’s nicer than some beer? Some beers. Discrete, defined units—not just a continuous substance, some goddamned beers.

It turns out everything about beer quantities is all over the place. A standard beer bottle or small can in the US contains 355 milliliters of liquid, or 12 fluid ounces. Then there are tallboys, stovepipes, growlers, 40s, bombers, quarts, and of course, if drinking draft beer, pints. This is where it all starts to go nuts. The pint, as a unit, is deeply confusing, and wrapping your head around it makes you feel like you’ve had about four of them.

Allow me to try, though: Everywhere in the world, a pint is one-eighth of a gallon. However, for archaic reasons that make minimal sense, a US gallon is different than a British, or imperial, gallon. An imperial gallon is 4.546 liters, while a US gallon is 3.785 liters; thus, a pint in the UK is 568 milliliters and a pint in the US is 473 milliliters. It’s all really, really stupid and unnecessarily confusing. Moreover, although a US pint is 16 ounces and a UK one is 20, the ounces are also different—a US fluid ounce is 29.6 milliliters, an imperial fluid ounce is 28.4 milliliters. So again, it’s stupid, so fucking stupid. To make matters even more confusing, a stovepipe can—as more and more craft beers come in—is an imperial pint presented in US measures: 19.2 ounces.

And yet, it somehow gets even more baffling—in French-speaking parts of Canada “a pint” in English is 568 milliliters, while un pinte in French is twice that. In Australia, a pint is 570 milliliters, rounded up from 568, but you’re more likely to be served a schooner, which is either half or three-quarters of a pint depending on where you are.

I can’t say it enough: It’s all nonsense and everyone involved sucks. But why?

Magna Carta (often erroneously referred to as the Magna Carta) is a peace treaty written up in England in 1215 to chill things out between the king and the church. Its main purpose was to limit the power of the crown, and despite being essentially replaced several times over by modern legislation, it still gets thrown about a lot today by the kind of people who think basic respect for other people is an infringement of their civil liberties.

However, it was intended to protect individuals in smaller ways as well. Believe it or not, one of these was establishing the right to have your ale served in a standard measure throughout the kingdom. Clause 35 states: “There shall be standard measures of wine, ale and corn (the London quarter), throughout the kingdom. There shall also be a standard width of dyed cloth, russet and haberject, namely two ells within the selvedges. Weights are to be standardised similarly.”

While the London quarter was less precise than it could be—it referred to one-fourth of a tun barrel, which varied in capacity, because fucking why wouldn’t it—the idea of standardized units being enforced began with Magna Carta.

These units were utterly garbage for several hundred years, changing frequently and based on stupid shit like buckets, failing to take into account how fluids behave under different temperatures and atmospheric conditions, but in 1824, they were properly defined. A gallon of liquid was the amount “whose volume was that occupied by 10 pounds of distilled water weighed in air at 62 degrees Fahrenheit and a barometric pressure of 30.” This came to 277.42 cubic inches of fluid. However, in the meantime, the US had stuck with the briefly-popular Queen Anne gallon—231 cubic inches of fluid. Maddening, confusing, full-on “Oh no, I’ve gone cross-eyed” shit.

Ultimately, most drinkers like what they’re used to, and think in terms of those units—for everyone that gets through their day dreaming about the three chilled bottles waiting for them in their fridge, there’s someone else who can happily rhapsodize about how a pint glass perfectly fits their hand. But traveling around, it can all get a bit silly—you can find yourself with dramatically less drink than you thought you were paying for, or have a round of three beers that turn out to each be larger than your goddamn head, and end up far drunker than you ever set out to get.

“To be honest, the serving sizes of beer infuriate me,” says Jonny Garrett, founder of YouTube’s Good Beer Channel. “They should all be smaller, save for session beer.” Smaller beers, he explains, by virtue of being quicker to drink, are more likely to maintain the right temperature and carbonation level for the time it takes to drink them. Anyone who has excitedly purchased a giant liter mug of lager on a hot European vacation can attest to this — the last third of it is basically flat, body-temperature soup.

“The Czechs have it right, with small pours more often,” Garrett tells me. “They keep bringing them until you ask them to stop.” In the Czech Republic, beer often comes as a snyt, a small beer priced accordingly low, served with a big head in a big glass. Drinking lots of small beers also means that staying for one extra is marginally less likely to be catastrophic, as you aren’t committing to two or three extra units of alcohol or another chunk of cash.

That said, it’s unlikely the world will ever agree on exactly what “a beer” is—it’s one of those things that people have a tendency to get a bit cold-dead-hands about. So much so that if the U.N. decided a beer was now 500 milliliters and that was that, there’d be a war.

However, drinking responsibly is all about knowing how much you’re putting in your body, and doing a bit of math to stay on top of what you’re doing while drinking unfamiliar quantities really can’t hurt. “I’ve only had two beers, officer,” won’t cut it if each one was the size of a fish tank.