DARPA Wants To Build A Computer That Mimics The Human Brain

The research group wants to develop machines with the capability for higher brain function. 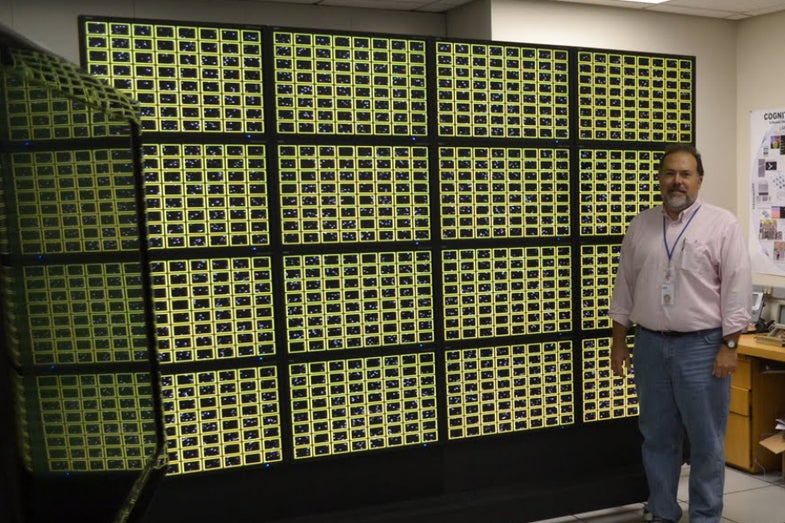 The Department of Defense’s research arm, DARPA, already has a lot of things on its wish list this year, but go ahead and add one more: a computer with the same brain capabilities as a mammal.

DARPA wants to build a machine that would be based on the neocortex, the (large) part of the human brain involved in higher functions like motor control, language, sensory activity and thought processes. The agency has put out a Request For Information on research of a “Cortical Processor” that they could use for analysis and detecting anomalies in large, complex data sets. In short, they want to basically build a version of an artificial human brain, one with temporal and spatial recognition that can solve “extraordinarily difficult recognition problems in real-time.”

“The cortical computational model should be fault tolerant to gaps in data, massively parallel, extremely power efficient, and highly scalable. It should also have minimal arithmetic precision requirements, and allow ultra-dense, low power implementations,” the request states. And what will DARPA do with that? It’s not entirely clear, and the agency may not be totally sure itself. The research call asks developers to come up with potential new applications for this type of system.

DARPA has already made inroads on creating brain-like computing systems through their SyNAPSE (Systems of Neuromorphic Adaptive Plastic Scalable Electronics) program, a biologically inspired computing project. In the third phase of SyNAPSE, DARPA-funded IBM researchers recently debuted a new brain-based computer chip called True North that mimics the organization and function of the brain with “neurosynaptic cores” that emulate neurons.

One day, DARPA would like to be able to build a machine that can think, sense and understand its environment, and find patterns and associations like the human mind does, with the brain’s small size and energy efficiency. Eventually this would also them to build robots with intelligence levels similar to mice or cats.