What Snooty Beer Should I Drink? [Infographic]

An experimental app designed by a computer scientist can best-guess your beer preferences. 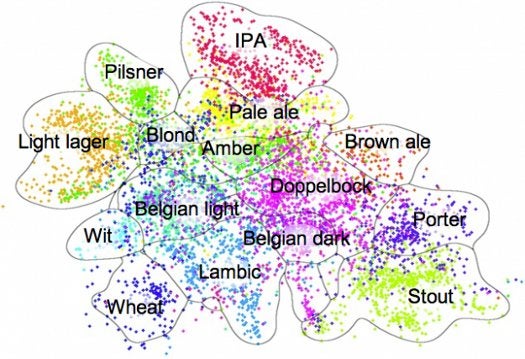 Interested in beer, but are somewhat confused by all of the styles and technical jargon that encrusts the current craft movement? Computer science graduate student Kevin Jamieson has created an experimental app that will help you navigate your next encounter at the snooty beer bar.

Jamieson studies machine learning, but wanted to construct a practical implementation of a process called active ranking on an iPad, so he built the Beer Mapper. How it works: The app presents two different beers; the user taps on the one that he or she prefers. After a few iterations of this, the app builds a “heat map” of beer styles by user preference. This should, in theory, be able to then recommend beers from the database that correspond to those calculated preferences.

Constructing the mapper involved a number of steps. First, Jamieson collected the reviews for about 10,000 beers (each beer must have at least 50 reviews) on RateBeer.com. He had his software parse each review and weight a series of key words that would (ostensibly) accurately describe the beer. Each set of keywords was turned into a vector that represented the beer as a whole, then the software looked for the nearest neighbors in Euclidian distance for each beer vector. The next bit is a bit tricky to understand, but Jamieson basically had his software plot out each beer onto a two-dimensional space, then looked at how “close” three beers were to each other. Doing so allowed him to delineate where one beer style ends and another begins. He did not follow the style descriptors used by RateBeer (because style guides can be notoriously misleading), but let the data dictate where the lines of demarcation would lie.

Jamieson then overlaid bitterness data (IBUs), color (SRM data) and “maltiness” (amount of unfermented sugar in the beer by comparing final gravity to original gravity) onto the spatial map of beer styles. This is where I get a bit skeptical, to be honest, because two of those criteria — bitterness and maltiness — have data values that don’t necessarily correlate well with drinker experience. And bitterness doesn’t correlate with “hoppiness;” problematic because I know a number of beer drinkers who don’t mind a bitter beer, but can’t stand a really grassy or resinous hop-bomb. To be fair, Jamieson does admit that the “maltiness” value is somewhat dubious, and the various keyword weightings should help address the hop-bomb category. 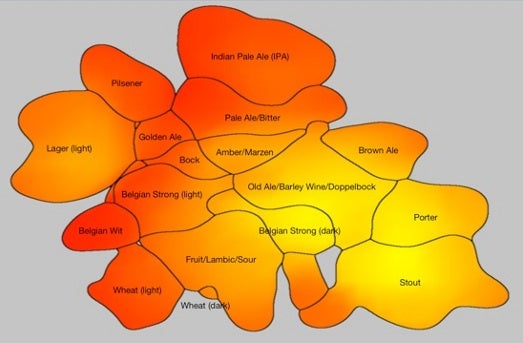 In any case, the app isn’t for public use. As Jamieson says on his website, it’s not intuitive enough for the average user. Guess you’re stuck asking the bartender for recommendations.