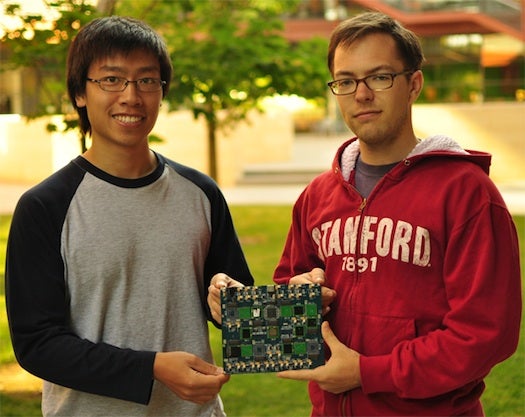 This new computer model of a brain has one million neurons and works just as fast as a live brain does.

There are other brain models, run on supercomputers, that are much bigger. IBM’s SyNAPSE, for example, modeled 530 billion neurons last November. (That’s more than the total number of neurons in humans’ brains, which clock in at 86 billion neurons on average.) Such models are very slow, however. Some take a couple hours to simulate a second of brain activity. SyNAPSE works 1,500 times slower than real time.

The new artificial brain, called Neurogrid, is a lighter, cheaper version of supercomputer models. It’s also much more energy efficient, using just 5 watts of electricity, compared to the 8 megawatts that Blue Gene/Q Sequoia, SyNAPSE’s supercomputer, uses. Neurogrid’s creators hope that others may use it to learn more about healthy brains and brains affected by diseases such as autism and schizophrenia, according to the U.S. National Science Foundation, which funded Neurogrid. Those are some of the same general goals that larger brain models try to achieve, but something like Neurogrid could make brain modeling more accessible to more labs.

Neurogrid is made of 16 chips, each representing 65,000 neurons. Researchers can customize almost 80 parameters in the neurons, which helps them model different types of neurons that have different properties. Each of Neurogrid’s neurons is able to communicate with thousands of other neurons, just like in a living brain.

The way Neurogrid computes is a little different from other computers, including supercomputers, according to the National Science Foundation. Most computers use a digital signal, where the computer answers a series of questions with either “true” or “false.” Neurogrid uses a digital signal to communicate between neurons, but uses an analog signal, which is continuous, to perform calculations.

That helps Neurogrid mimic the way living neurons work. Neurons use an analog-like process to decide whether to fire, but their actual firing is like a digital signal because they may only either fire (“true”) or not fire (“false”).