What happens when you mash up Big Data, genomics, and a whole lot of Holstein dairy cows? You get the... 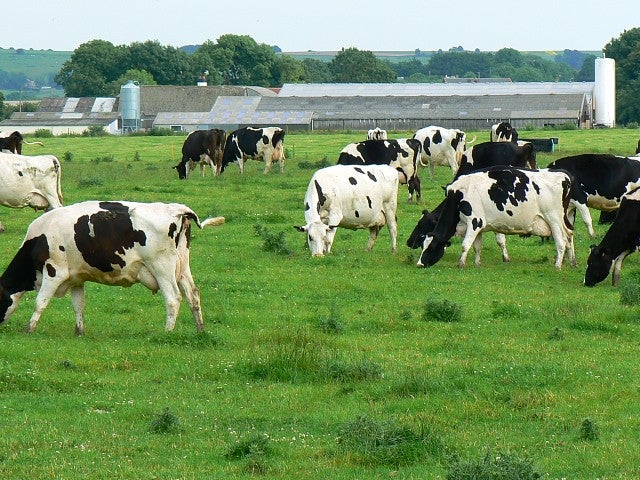 What happens when you mash up Big Data, genomics, and a whole lot of Holstein dairy cows? You get the best bull in America. In The Atlantic today there’s a great piece on Badger-Bluff Fanny Freddie, the Holstein bull that science says is the best among America’s 8 million dairy cows.

This story is as much about data as it is genomics or selective breeding. Freddie, as the bull is known, isn’t so much a product of any special circumstances as he is a consequence of years and years of meticulous record keeping in the dairy business that has generated enough data to allow researchers to connect the dots between certain markers in the genome and the relatively few physical traits desired by dairy producers–milk production, protein in the milk, longevity, fat in the milk, udder quality, etc. These data-driven projections are turning out to be very accurate and therefore very useful to dairy farmers looking to get the most out of their cows. The economics of breeding better milk-producing machines is in turn also breeding more science and feeding even more data into the system.

This kind of big data analysis of the 50,000 markers on the cow genome that are regularly examined within the industry makes the Holstein dairy cow something like the 21st-century equivalent of Gregor Mendel’s pea plants, Atlantic editor and writer Alexis Madrigal says in the piece. And this practice of genetically examining sires offers a glimpse of what genomics holds for humans as it matures as a science.

For humans, genomics is still a relatively young discipline, but in the dairy business using genomic data to predict physical outcomes is relatively mature. Geneticists are making real-world predictions about a bull’s offspring, and unsurprisingly they are finding that given enough data, they are correct. They can even quantify these genomics, assigning a number–called lifetime net merit–that’s presented as a dollar value that defines each bull’s potential. That’s how we know Badger-Bluff Fanny Freddie–or at least his genetic material–is the very best around. And the implications of that are huge.

Read it at The Atlantic.