A few minutes ago, an earthquake struck the East Coast of the U.S., centered near Richmond, Virginia, says the U.S.... 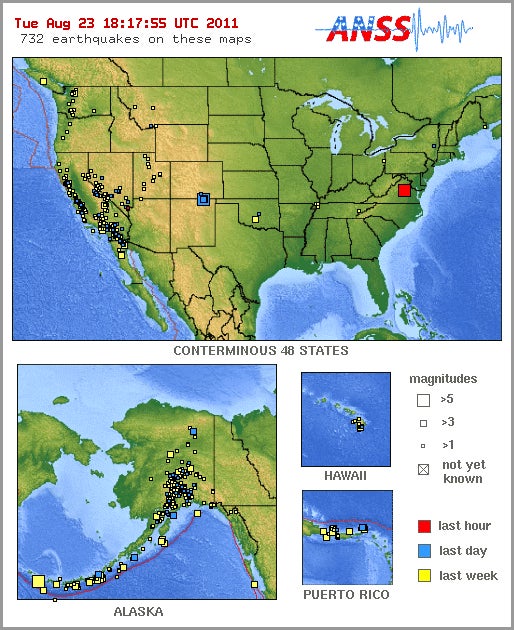 A few minutes ago, an earthquake struck the East Coast of the U.S., centered near Richmond, Virginia, says the U.S. Geological Survey, which gave it a preliminary magnitude rating of 5.8 (just updated to 5.9). Tremors were felt all throughout the Mid-Atlantic and Northeast–the PopSci headquarters in Midtown Manhattan shook a bit, causing a minor nerd panic. No injuries or damage have been reported yet.

Colorado was hit with a 5.3 magnitude earthquake yesterday, the state’s biggest in decades. A series of minor earthquakes hit Northern and Southern California last week, with some continuing today, but the big one today was centered in Northern Virginia, near Richmond. Though no injuries or damage have been reported, several news sources are reporting that the Pentagon and U.S. Capitol building, both located nearby, have been evacuated. Cell phone service in New York city appears spotty, especially AT&T, though it’s not clear whether that’s related to the earthquake or the high number of calls undoubtedly being placed right now.

We’ll keep you updated as we learn more.