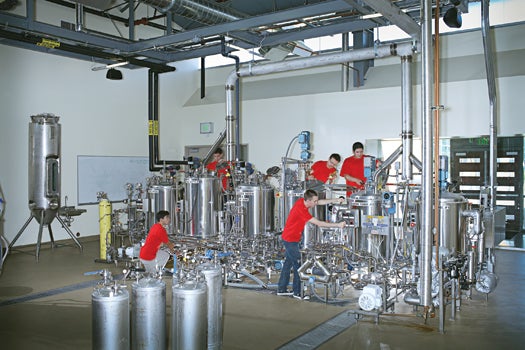 Many students pass through the beer lab of Professor Charles Bamforth, who for eight years worked as a senior manager at Bass Brewers. But the ones he most enjoys instructing come from the University of California at Davis’s distinguished department of viticulture. “I like to convert one winemaker into a brewer every year,” he says. “I consider beer a superior beverage, and I know it’s a lot harder to make.”

His students face a long list of complicated questions about beer: How should a lager brewer wield the flavoring ingredient dimethyl sulfide? Does silicon in beer contribute to healthy bones? Twenty-two-year-old chemical-engineering major Francine Jaramillo spent a year studying how beer foam samples absorb light at 230 nanometers in order to develop a better standard to measure foam “lacing” against the side of the glass.

Undergrads first make beer in the Practical Malting and Brewing course at the 1.5-barrel pilot brewery. The course culminates in an Iron Brew competition judged by professional brewmasters. The school ranks first among national universities in publishing peer-reviewed articles on food science, and every year, 10 or so brewing students go into the business, either at small breweries or such multinationals as Anheuser-Busch InBev.

Although the work is demanding, the students say the atmosphere is low-key. On Jaramillo’s first day working at the brewery, she accidentally hit an emergency steam-release button. “All of a sudden, I hear this cloud of steam hissing from the pipes,” she recalls, “and I was like, ‘Oh my goodness, I broke the brewery.’ The lab manager just said, ‘Now you know what that button’s for.'”