Brought to you by Team Crimson Viper 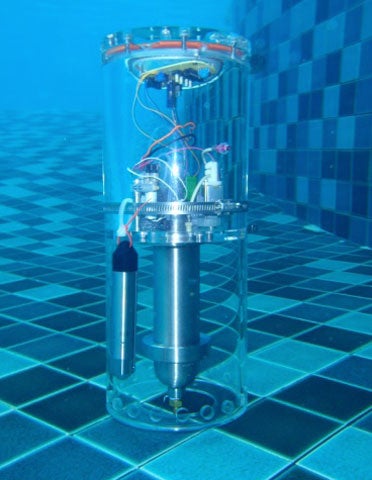 A new type of hydrogen fuel cell uses bacteria to provide variable buoyancy, allowing an autonomous ocean sensor to surface and dive with ease. Rather than harvesting electricity from microbial metabolism, the system harvests the metabolic byproducts themselves. Read: gas.

The Naval Research Laboratory is calling the device a Zero Power Ballast Control, because it doesn’t require using any fuel source to move up and down in the water column.

In a recent test off the coast of Thailand, the system was used to move a bathythermograph sensor, a common ocean sensor that detects changes in water temperature and pressure at varying depths.

The cylindrical sensor consists of two chambers: an upper section containing all the electronics and valves, and a lower chamber that becomes pressurized while bacteria are growing, according to a Naval Research Lab news release. The cylinder was attached to a mooring line off a military pier in Sattahip, Thailand, and held in place for a week. In a series of tests, the bacteria produced enough hydrogen gas to make the cylinder float to the surface.

The researchers also used a very low-power timer, using between 1 and 10 milliwatts, to program the sensor to surface and dive on-demand. The bacterial gas generation was enough to power the timer. On-board sensors confirmed the cylinder’s rise and fall, according to researcher Justin Biffinger.

Microbial fuel cells convert chemical energy to electrical energy by tapping the protons and electrons produced in the redox reactions of metabolism. But this one takes it a step further, using gas as a buoyant material, rather than using energy to power a motor or a turbine.

This type of sensor could be used for a wide range of military and civilian ocean monitoring experiments, according to the Navy, from mine detection to meteorology and oceanography.

The experiment, called Crimson Viper, was conducted through a partnership between the U.S. Pacific Command and the Royal Thai Defense Science and Technology Department.