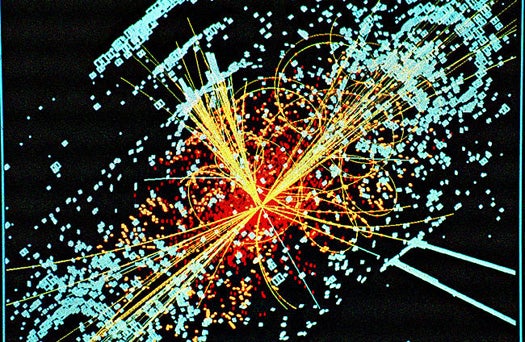 The LHC smashed a record-breaking number of particles at midnight Geneva time last night, setting a new standard for beam intensity. CERN replaced Fermilab’s former record of 4.024 × 1032cm-2s-1 with a smug 4.67 × 1032cm-2s-1. That’s a lot of zeros, ranging somewhere in the billions of billions. Of billions.

What do all those zeros really mean? Like in a game of molecular bowling, the LHC’s hunt for the Higgs boson depends on a high number of collisions. But in this game, when the ball hits the pins, it creates bright lights–the brighter the lights, the more potential collisions. A strike would look like a blazing solar explosion, while a gutter ball would look depressingly dark.

This beam intensity record is a strike, but the game isn’t over. CERN scientists is bowling for data, hoping to prove the existence of the Higgs boson, a theoretical molecule thought to give mass to all the other particles. Last night’s smash means a lot more data, which brings the LHC a frame closer to their goal.

The collider will continue running until the end of this year, when it will take a well-deserved break.