A practical artificial leaf that can turn sunlight and water into energy as efficiently as the real thing has long... 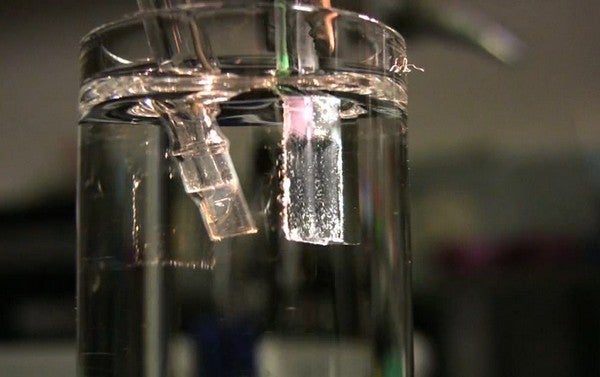 A practical artificial leaf that can turn sunlight and water into energy as efficiently as the real thing has long been a Holy Grail of chemistry, and researchers at MIT may have finally done it. Today at the National Meeting of the American Chemical Society researchers from MIT’s Nocera Lab, led by Dr. Daniel Nocera, claimed that they’ve created an artificial leaf made from stable and–more importantly–inexpensive materials.

The artificial leaf looks nothing like the natural leaf that it mimics, but its inputs and outputs are the same. Made of silicon, electronics, and various catalysts that spur chemical reactions within the device, the artificial leaf uses sunlight to break water into hydrogen and oxygen which can then be used to create electricity in a separate fuel cell. Placed in a gallon of water and left in the sun, these artificial leaves could provide a home in the developing world with basic electricity for a day, Nocera said.

The Nocera Lab’s artificial leaf, it should be noted, isn’t the first working attempt at recreating photosynthesis in artificial materials. But previous attempts have led to artificial leaves full of unstable materials that are expensive and lead to short life spans. Nocera and his team identified a set of inexpensive, common catalysts including nickel and cobalt that get the job done with far less expense. And in the lab their playing-card-sized leaves have worked continuously for 45 straight hours without a drop in output.

Nocera and company will next try to boost both efficiency and lifespan of their photosynthetic material. It’s still a workbench technology at this point, but the leap forward presented here is significant. Scaled and mass produced, something like the Nocera Lab’s leaf could be the key component to shifting toward a hydrogen-based economy. In the nearer term, such technology could at the very least power parts of the globe that are currently off the grid with clean, plentiful, and easy-to-come-by energy.