Quantum communication offers myriad advantages over conventional fiber optic networking, but manipulating electrons or photons to behave in the proper... 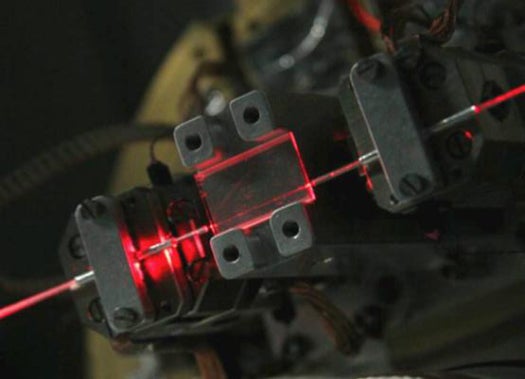 Quantum communication offers myriad advantages over conventional fiber optic networking, but manipulating electrons or photons to behave in the proper fashion has long kept quantum networking a “theoretical” pursuit. But University of Calgary researchers working with German colleagues at the University of Paderborn have pushed quantum networks a big step closer to reality by demonstrating that specially doped crystals can store and retrieve information encoded in entangled photons. In other words, they’ve created a form of quantum memory.

Like fiber optic networks, information traveling through quantum networks via entangled particles needs somewhere to live – something akin to computer memory – in order for complex computations to take place or sophisticated networks to be created. This isn’t easy, as the entangled link between two particles is fragile – tamper with it too much, and the link can be fouled. You also have to make the photon or electron sit still, another problem entirely.

But the researchers were able to pull all these tricks off at once using a lithium niobate crystal doped with rare earth ions and chilled to -454 degrees. Here the science gets tricky (New Scientist has a great, concise explanation if you care for it), but essentially the researchers tuned this crystal just right to make it produce an entangled copy of a photon. Those photons, sharing their quantum link, can be separated and remain identical – a change in the measurement of one affects a change in the measurement of the other.

The material properties in these cooled crystals are such that the photons can be stored and retrieved, much as bytes on a computer are squirreled away for later recall. Compared to the complexity with which our conventional computers and networks function, the ability to store and retrieve a single photon might seem rudimentary. But it’s a big first step down a road that could produce unhackable communications schemes and superfast, energy efficient quantum computers.

And if that single proof of concept seems as fragile as the bond between two entangled photons, think again; a separate research team at the University of Geneva in Switzerland has reported similar results using a different kind of crystal.