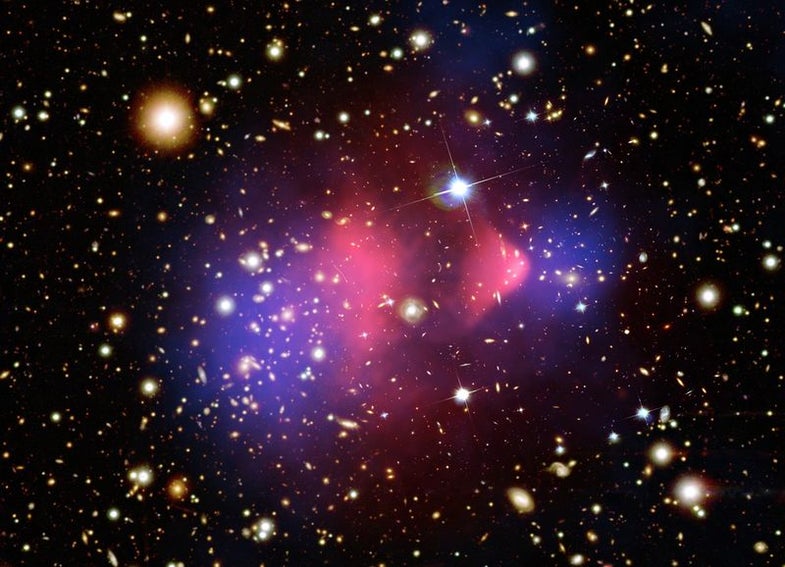 This is the first picture ever taken — indirectly — of dark matter. It’s one of the most famous images in modern physics, and with the help of a supercomputer, now you can watch it evolve in 3D.

Scientists at the Argonne National Laboratory, the Flash Center at the University of Chicago and the Harvard-Smithsonian Center for Astrophysics used supercomputers to model the colossal forces involved in galaxy collisions just like the one above. Astrophysicists would like to know more about dark matter’s role in galaxy evolution, and sophisticated computer models are helpful. They’re also awesome to watch.

The above image of the Bullet Cluster is actually a combination of data sets from the Chandra X-Ray Observatory, the Hubble Space Telescope and the Magellan telescope in Chile. The pink light represents the temperature and density of normal matter; the visible stars represent the galaxies; and the blue light represents contour levels from dark matter, detected from the way it bends light behind the clusters.

As the cluster collides, the dark matter cores slip past each other without interacting, so in the image, it looks like they’re moving ahead of the normal matter.

Most of the universe is made up of dark matter, which gets its name simply because no one knows what it is. Scientists do know that it doesn’t interact with normal matter, except gravitationally. So how do you model something like that? Very carefully, it turns out.

As the galaxies swirl together, baryonic matter mixes and generates turbulence. This process is pretty well understood, so programmers used hydrodynamic code to model the regular-matter collisions.

But dark matter only interacts gravitationally, so programmers couldn’t generalize. They modeled each particle individually, in a process called an N-body code.

As the galaxies’ dark matter cores reach equilibrium and start to orbit each other, their gravitational influence mixes up the normal matter some more. Ultimately, the mixing of hot gas is completely driven by the violent motion of the dark matter. The simulation is yet another demonstration of the powerful role dark matter plays in the universe.

Check it out below.