Nuclear-powered civilian ships could be powerful enough to smash through Arctic ice on their own, potentially using the Northeast Passage... 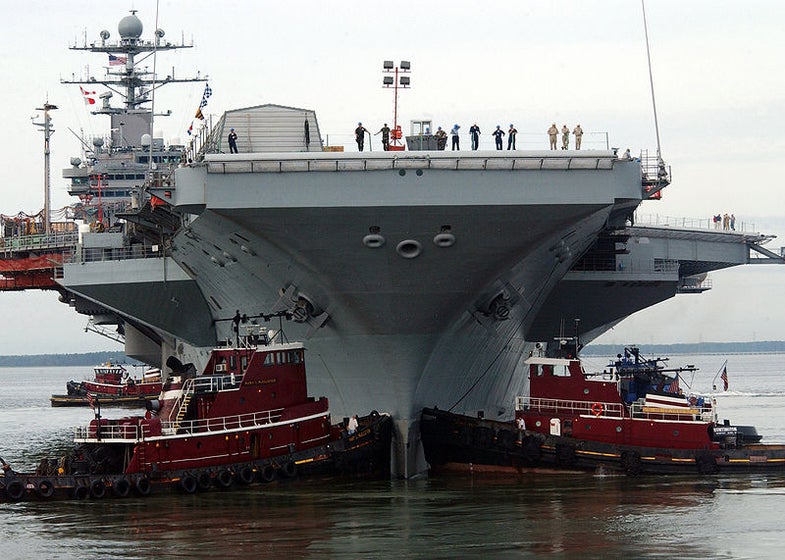 The USS George Washington is one of the country's nuclear-powered aircraft carriers. Wikimedia Commons
SHARE

Nuclear-powered civilian ships could be powerful enough to smash through Arctic ice on their own, potentially using the Northeast Passage to travel from Asia to Europe and reducing time and carbon emissions for international shipping lines.

Nuclear propulsion might therefore be a cheaper option for ships on long voyages, the Register reports.

For ships traveling from the far east to Europe, it would be a lot faster to take the Northeast Passage than the usual route, through the Suez Canal. But until the Arctic melts permanently, the trip requires escort by ice-breaking ships, which are limited in number. While nuclear merchant ships would be costly, they’d have enough thrust to break their own ice, and they would also travel faster than gas-powered ships.

As of now, Russia is the only country with nuclear-powered civilian ships, the Register says. A few were built in the 1960s and 1970s, but they were too expensive to compete with those powered by traditional fuel. But with oil prices expected to continue rising — and the possibility of carbon-emission restrictions — nuclear ships could become cost-effective. The British shipping firm Babcock Marine says shipping lines could save money by switching to nuclear propulsion, especially for tankers carrying liquefied natural gas, the Register says.

The paper reports that COSCO, the huge Chinese shipping firm, is interested in the type of requirements the UK might impose on visiting nuclear ships.

The U.S. has several nuclear-powered aircraft carriers, which travel quickly to help increase winds on deck, helping aircraft take off. Nuclear-powered commercial ships would be fast, too, but the real advantage is thrust, as the Register explains — it would help ships ram through sea ice.

Combined with high fuel prices, this innate icebreaking ability could make nuclear-powered merchant ships a worthy investment, the Register says. Then all we would have to do is secure all our ports.