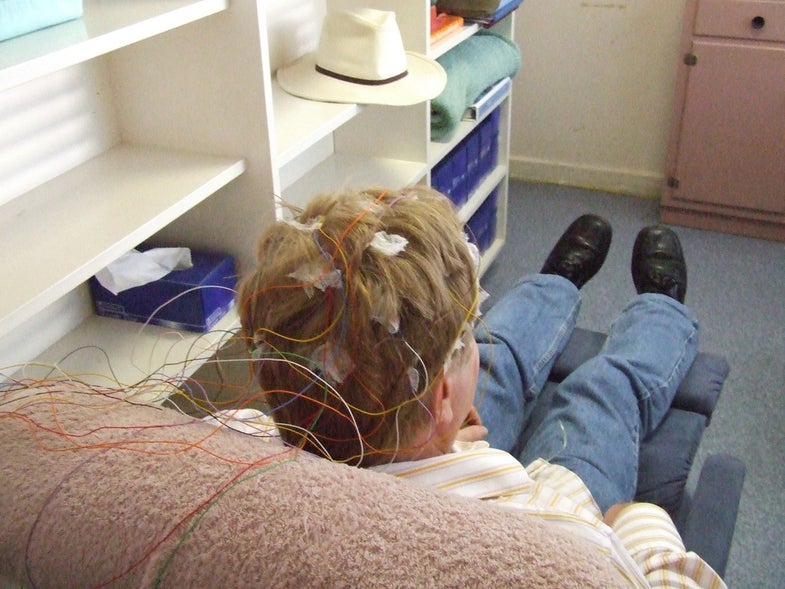 Mind-reading can improve national security, a new study says. Brain-wave scanners could help authorities uncover secret details of a terrorist plot and help pinpoint people with guilty plans before they commit a crime, according to research conducted at Northwestern University.

If the test works in real life, authorities will be able to pluck information from terrorist “chatter” and study the brain waves of terror suspects to confirm information about an attack in advance, such as date, location and weapon.

Even when the researchers had no advance details about mock terrorism plans, the technology still identified critical concealed information, according to J. Peter Rosenfeld, a psychology professor at Northwestern. Given a few details, the system works flawlessly, the researchers say.

The team used a mock terrorism scenario in which the subjects planned an attack in a major city. They were given information about weapons and bombs, and they had to write a letter about their plans to encode the information in memory.

Then, researchers attached electrodes to the “suspects” and measured their P300 brain waves, a type of cortical activity that occurs when meaningful information is presented to a person with guilty knowledge. It has been debated as a replacement for polygraphs.

In one test, the subjects sat in front of computer monitors that showed the names of various cities, including Boston, Chicago, Houston, New York and Phoenix. The city the participants chose for the attack presented the greatest P300 response, the study says.

Throughout the test, when the researchers knew some details about the planned attacks, they were able to correlate the terrorists’ P300 brain waves to guilty knowledge with 100 percent accuracy.

The protocol could be used to predict concealed knowledge and identify future activity, he says, providing an example of a suspicious person entering a building.

“You suspect that they’re terrorists, and you have some leads from the chatter. You’ve heard they’re going to attack one city or another in one fashion or another on one date or another,” he says. Our hope is that our new complex protocol — different from the first P300 technology developed in the 1980s — will one day confirm such chatter in the real world.”