As the aerospace world prepares to say goodbye to the space shuttles, engineers are looking for cheaper, faster replacements. The... 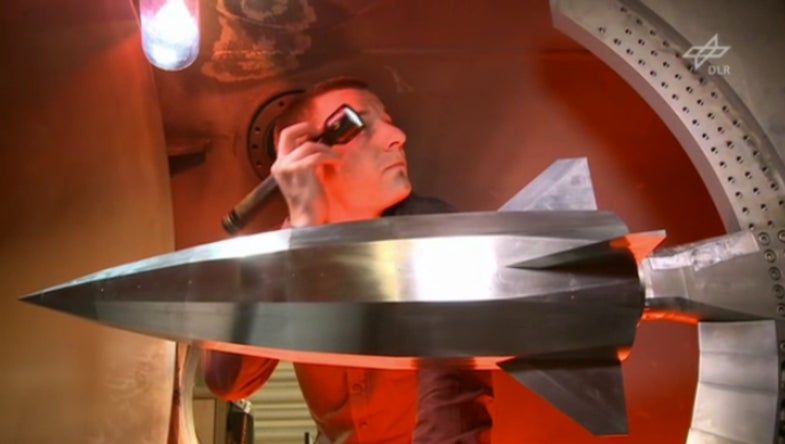 As the aerospace world prepares to say goodbye to the space shuttles, engineers are looking for cheaper, faster replacements. The German space agency is apparently ahead of the game, announcing a retro-looking multi-faceted design late last week.

The German Aerospace Centre (DLR) is developing a heat-resistant, 8-sided rocket that can re-enter the atmosphere without breaking up or suffering much damage, according to The Local. It would be the only rocket capable of guiding itself home.

The flat-sided nose cone has eight faces, which provides better aerodynamics and cheaper construction than a round nose. Last week, DLR scientists unveiled the 8-foot nose cone for the SHEFEX II program, short for “sharp-edged test flight,” at the DLR headquarters near Munich. It will make its first test flight next March in Australia.

It would be an improvement over current ballistic systems like those used by Russia and China, which are incapable of a controlled re-entry.

The SHEFEX II rocket could be controlled as it descends from about 60 miles above Earth. Once it reaches roughly 12 miles, a parachute would guide it home.

One major problem is keeping the nose cool, and that’s where the multiple facets come in. They will deflect the heat of re-entry so that only the apex will get extremely hot. What’s more, gas will be pushed through the apex to act as a buffer.

After initial unmanned tests in the Australian Outback next spring, it’s possible DLR could stage a manned flight, with cooperation from the European Union and the U.S., Weihs says.