Nanowires inside a rat can convert the power of breathing and heartbeats into electricity, according to researchers at the Georgia... 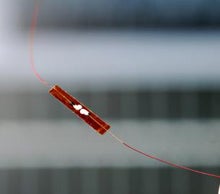 A single zinc oxide nanowire can be attached to a rat's heart, where it produces electric current as it bends with every beat. Via Tech Review. Zhong Lin Wang via Technology Review
SHARE

Nanowires inside a rat can convert the power of breathing and heartbeats into electricity, according to researchers at the Georgia Institute of Technology. The nano-generator could conceivably lead to nano-scale medical implants and sensors powered by the body, Technology Review reports.

A single zinc oxide nanowire can be attached to a rat’s heart, where it produces electric current as it bends with every beat. Via Tech Review

The same GIT team proved five years ago that zinc oxide nanowires could produce electricity from a running hamster, for instance, or from tapping fingers. The wires produce electricity when under mechanical stress, called the piezoelectric effect. But now, it’s been proven to work inside a living animal.

Zhong Lin Wang, a materials science and engineering professor at Georgia Tech, led the team that attached the nano-generator to a rat’s diaphragm.

Researchers put a zinc oxide nanowire onto a flexible polymer and encapsulated it into a polymer casing to protect it from bodily fluids, Tech Review reports. When attached to the rat’s diaphragm, the animal’s breathing stretched the nanowire, and it generated a tiny amount of electricity — about four pico-amps of current at two millivolts. When it was attached to the rat’s heart, the nano-generator produced about 30 pico-amps at about three millivolts.

The rat generator operates at the femtowatt scale — a pico-amp is a million millionth of an amp, so it is a tiny amount of current — so not very much power. But the technology has potential to power nano-sized devices, Wang says in a paper on the results published in the journal Advanced Materials.

Wang’s team is already building on the rat findings, Tech Review reports. The team has a device that integrates hundreds of nanowires into an array, giving an output current of about 100 nano-amps at 1.2 volts. The next step is to connect the higher-powered nano-generator inside an animal, Wang says.

Power From the Heart

These graphs show the power output of a nano-generator attached to the diaphragm and heart of a lab rat.