You Can Play Jeopardy Against Watson, IBM’s Trivia-Master Supercomputer

Here’s how to end any productivity you may have had today: courtesy of the New York Times, you can now... 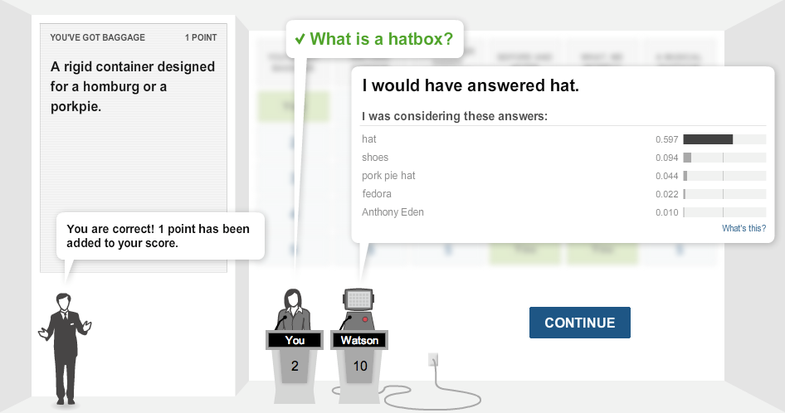 Here’s how to end any productivity you may have had today: courtesy of the New York Times, you can now go head-to-head in Jeopardy against Watson, IBM’s trivia-playing supercomputer.

As PopSci reported last year, Watson was designed to decipher Alex Trebek’s riddles, tolerate his pronunciation of French words, evaluate its confidence about possible solutions and ring in with an answer — all within seconds. Now you can beat it at its own game.

Watson evolved out of IBM’s DeepQA research on natural-language processing, a means of digitally parsing the information in human communication. The computer is intended to be the world’s most advanced “question answering” machine, able to understand a question posed in everyday human language and respond with a precise, factual answer.

Operating at petaflops of parallel processing power, Watson thumbs through its databases, which include scanned textbooks, to come up with the best answers.

Watson is apparently scheduled to make a Jeopardy appearance this fall, but you can make yourself feel smarter (or dumber) today, thanks to the Times’ little preview.