One More Proposal to Plug the Oil Leak, But Can We Afford To Make Things Worse?

As BP sits down for a not-so-friendly back and forth with Congress this morning it seems the oil giant is... 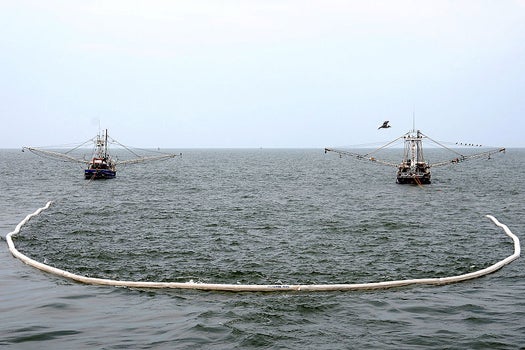 As BP sits down for a not-so-friendly back and forth with Congress this morning it seems the oil giant is resigned to let the Gulf oil leak flow until the relief wells are completed in August. But a nuclear physicist from California thinks he’s devised a method that could stop the gushing well by pumping steel balls into the riser. It’s likely to work, he says, and even if it fails it won’t make matters any worse. Naturally, not everyone involved is so optimistic.

Saying things can’t get any worse in the Gulf at this point seems like a dubious claim, but Willard Wattenburg’s idea has made it all the way to the desk of Energy Secretary Steven Chu. Why? Wattenburg orchestrated the capping of 500 wells in just seven months in Kuwait in the aftermath of Gulf One, a job that was estimated to take 5 years, so he’s got the oil industry chops. But naturally there are some who think the idea is a bad gamble that could indeed exacerbate later efforts to stem the flow of oil.

Wattenburg’s simple idea involves pumping steel balls into the leaking riser that are heavy enough to sink downward in spite of the upward pressure from the upward-surging oil. Once the balls get deep enough down they’ll begin to settle and slow the flow – the job the drilling mud failed to do during the top kill. Once the flow is decreased, we can pump in the concrete and cap the well. We’ll need a bout 200 tons of steel balls, Wattenburg says. Total cost: about $100,000.

What’s more, if it fails if fails without leaving an environmental crisis in its wake, Wattenburg says, and the relatively low cost make it worth a try.

Other engineers are skeptical. For one, they say, the oil is rushing up not through the central pipe, but through the space between the central pipe and the outer casing. The balls would likely take the easiest route downward into the central pipe, where they won’t make a difference. Further, a bunch of steel balls in the well could complicate capping efforts once the relief wells are complete.

The real question now is: Do we make the conservative play and wait for the relief wells to be drilled or should the government go in and attempt new methods of plugging that damn hole. And if those attempts make matters even worse in the Gulf, does that take the blame off of BP to some degree?