The random-number race is on 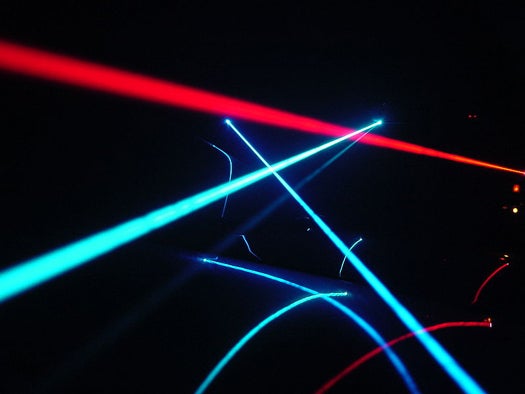 There’s a race brewing between Chinese and American researchers, but this one has no weapons or spheres of influence or even space — though it does involve lasers. It’s a race to generate the most random numbers the fastest, and by tapping the quantum noise in a laser beam the Chinese just took the lead, turning out 300 megabits of random numerals per second to break a U.S. record that stood for only a matter of days.

Randomness can be confusing and often misleading, but it can also be extremely useful. Cryptographers seeking to generate unbreakable codes, for instance, love randomness.

But while computer algorithms can spew out seemingly random strings of numbers with great enthusiasm, those numbers are still generated by a logical process and therefore not truly random even though they may look the part.

True randomness is a bit more difficult to wrap one’s mind around, but mathematicians and physicists alike agree that the quantum world — wherein chaos is king and uncertainty is the order — is the best generator of quality randomness. Researchers have turned to lasers and the photons they generate to create sequences they feel are truly random.

A laser and a basic mirror can produce a string of zeros and ones of quality randomness, but devices that do this can only produce numbers at a rate of 16 megabits per second. Mathematicians, and especially cryptographers and security geeks, want to be able to produce randomness at far faster rates. To do so they’ve turned to phase noise, or the uncertainty in the way photons are generated inside a laser.

Yesterday Chinese researchers showed how they’ve tapped quantum noise to cause small changes in the frequencies with which photons are emitted from a laser. With a little physics wizardry, they create a beat signal by holding back a section of the laser light and then interfere that with the later output. They then convert that beat signal from analog to digital, creating a sequence of numbers that pass a series of tests for randomness.

The method is a bit mind-bending, but still more impressive is the output: 300 megabits per second of random data, blowing a 100-megabit record set by American scientists using a different method earlier this month clean out of the water. Which means the U.S. will now have to top the Chinese to stay ahead in the encryption game, setting up a competitive back-and-forth that should make true Cold Warriors wistful for the good old days.