When it comes to burns and other exterior flesh wounds, bacteria often show no quarter, getting in deep and causing... 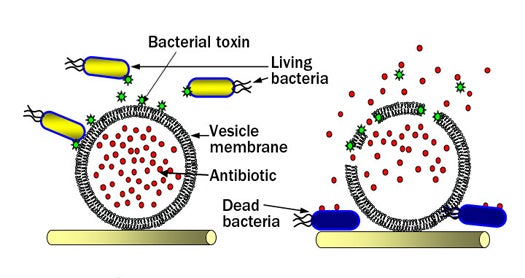 When it comes to burns and other exterior flesh wounds, bacteria often show no quarter, getting in deep and causing serious complications for patients unlucky enough to be stricken with infections. But a new technique takes a page from the book of guerrilla warfare, lacing wound dressings with antibacterial land mines that coax malicious microbes into spelling their own dooms.

The most common bacteria-fighting addition to wound dressings today is silver, which tends to reduce microbial activity. But silver also tends to thwart human cellular activity, complicating the healing process.

So researchers at the University of Bath in the UK decided to use the element of surprise to lure bacteria in for the kill. Their dressing contains tiny vesicles filled with an antibacterial agent. To the bacteria, the vesicles look like healthy cells ripe for infecting. But when bacteria attack, the capsules explode, killing the offending microbe and any others that are unlucky enough to be nearby.

The team tested the technique by placing harmful staphylococcus and pseudomonas bacteria on scraps of booby-trapped fabric along with a harmless strain of E. coli. The toxin-slinging pseudomonas and staph grew very little, while the harmless E. coli flourished, proving in concept that the idea works. But there’s still a lot of work to be done; rarely do microbial communities so neatly arrange themselves into friendlies and enemies, so better real-world testing is needed. The team also needs to prove they can tailor the dressings to tackle a wide variety of bacterial strains.

Even so, the idea of taking the fight to the enemy rather than playing defense seems like a good one. The team is now trying to make vesicles that are more durable — hanging around in the dressing for more than a few hours — and figure out what other antibacterial armaments they can add to the dressings.