We’ve got computers that run on a single iodine molecule and transistors made of just a handful of atoms, so... 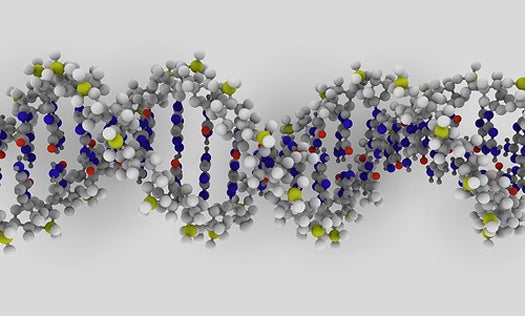 We’ve got computers that run on a single iodine molecule and transistors made of just a handful of atoms, so why not create electronic components out of tiny strands of DNA? A team of researchers at Hebrew University has for the first time created DNA-based logic gates that could lead to tiny injectable bio-computers capable of making simple calculations inside the body.

Formed from short DNA strands and their complements, the DNA logic gates closely mimic their electronic counterparts by representing one of two states – like the zeros and ones of binary code – depending on the presence of an input. In tests, they modeled a DNA version of an XOR logic gate that generates an output when one of two inputs is present, but not when both or neither is present. By design, the DNA logic gate fluoresced when one of two inputs was present, and accurately stopped fluorescing when both inputs were present.

This kind of reverse biomimicry could have multiple applications, particularly in the realm of drug delivery, possibly even leading to preemptive drugs that live in the body waiting identify and deal with potential problems. Previous attempts at DNA-based computing were too limited to accomplish such a feat, as their DNA strands could be used for a function only once. But the Hebrew University team claims its strands reform after each step.

That means not only that the gates can be used over and over again, but that they can be wired in series, each one creating a new output that serves as the input for the next gate, the basis for complex calculations. The gates would then go back to their usual state, ready to process the next – possibly different – input.

The result could be a new breed of smart drugs that are injected into the body before an injury occurs, waiting to be triggered by enzymes or other catalysts associated with a particular injury or illness. That means – in theory – we might someday be able to create DNA-based computing systems that diagnose and treat common medical problems from within our bodies without our ever knowing it.