One of the steps in fruit-fly development is similar to the healing of wounds. Until recently, scientists believed that when... 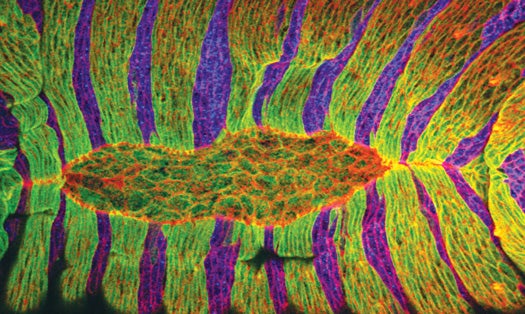 One of the steps in fruit-fly development is similar to the healing of wounds. Until recently, scientists believed that when fruit-fly bodies take form during a process called dorsal closure, long strings of the protein actin behaved like the drawstring of a purse, pulling together the epithelial cells that eventually form the fly’s skin. Damian Brunner’s research group at the European Molecular Biology Laboratory in Heidelberg, Germany, however, showed that contractions bringing epithelial cells into the gap were generated by a different set of cells “acting like a primitive muscle.”

By taking more microscope pictures per minute and combining these with computer simulations, the researchers showed that after the quasi-muscle cells contract, the actin cable around them prevents the epithelial cells from moving back, acting like the locking mechanism in a ratchet. This insight may help scientists find ways to improve wound-healing in humans.