Simple organisms pave the way to the hydrogen-fueled future 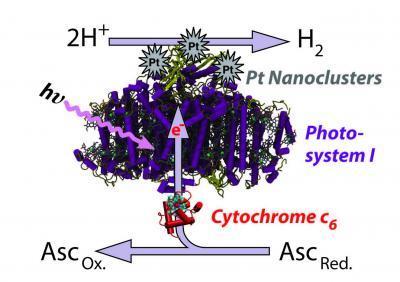 Algae get a lot of airtime as a possible future source of biofuels to wean us from dirty fossil fuels, but even biofuels don’t go so far as to eliminate hydrocarbons (and their constituent carbon emissions) from our energy diet. But a different use for algae could prove a better solution to the future of fuel.

A new process that produces clean, sustainable hydrogen from photosynthesis in algae could change all that. The means of manufacturing clean, usable hydrogen has heretofore required a high-energy process that drastically dilutes the upside.

Researchers at the U. of Tennessee Knoxville and Oak Ridge National Labs found that in certain algae, the cellular workings that carry out photosynthesis can be coaxed into producing a clean, steady supply of hydrogen when exposed to light and a platinum catalyst. As far as bang-for-buck is concerned, the novel process could be a boon; compared to biomass sources of ethanol and biodiesel, the process turns out a much larger quantity of fuel with a much smaller energy input.

Previous efforts to produce hydrogen from algae were stymied by the high temperatures that exist in large sunlight-trapping systems, which render the process slow and inefficient. But the researchers found that a thermophilic blue-green algae that thrives at higher temperatures will carry out photosynthesis in environments up to an ideal 131 degrees Fahrenheit. The method also cuts out inefficiencies, like the amount of time it takes a plant to photosynthesize, die and fossilize, and the relatively high energy required to cultivate and process biomass into fuel.

Researchers are now tasked with scaling the process to meet energy demands that grow daily despite the fact that energy reserves are ever-depleting. Speeding the process at which algae produce hydrogen provides efficiencies that clear a path toward a sustainable hydrogen economy where vehicles emit no greenhouse gases and America’s reliance on foreign oil is trimmed to nil. That doesn’t just spell a scientific breakthrough, but a much-needed shift in the way we live our lives.