The perfect Rubik’s to challenge your brain—whether you’re a beginner, expert, or in between

These puzzles range from easy to pull-your-hair-out hard. 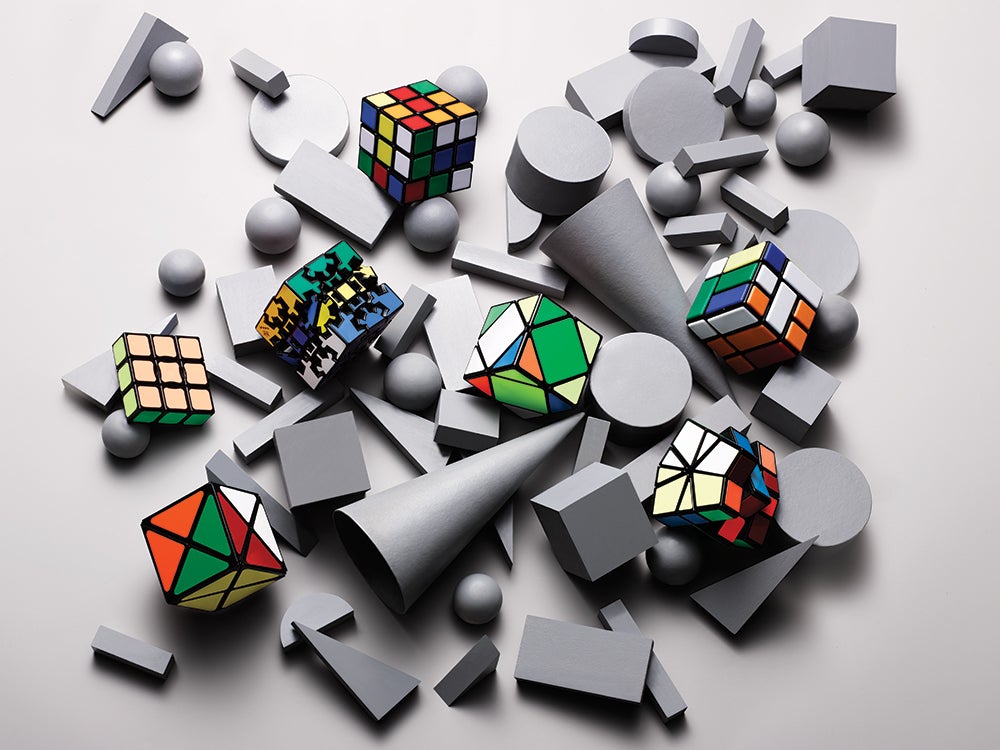 It took Ernõ Rubik more than a month to solve his namesake puzzle the first time. Today, competitive cubers can best the classic brain teaser in less than five seconds, and casual players can do it in minutes. Their not-so-secret weapon is math. More specifically: algorithms. Devising or memorizing sequences of moves that accomplish a particular goal—for instance, swapping two corners—is key to cracking your Rubik’s Cube. When game designers start stacking more layers onto a standard 3-by-3-by-3-square cuboid, it doesn’t change those algorithms much; it just makes the solve mega-tedious. But changing other variables like rotation angles and block depths creates puzzles for many skill levels and breaking points. 1. Easiest The nine-block Floppy Cube is one layer of a classic Rubik’s, so it’s perfect for a beginner twister. When it is scrambled, smooth movers can solve it in as few as eight clicks. Even random guessers will get there eventually; the colors have only 192 possible combinations. 2. Easier Instead of rotating faces, the Dino Cube has rotating corners. The arrangement creates 12 moving parts that can’t go upside down and confuse you. That simplicity means novices can solve the cube by sight alone—no Googling for the algorithms. 3. Easy The Gear Cube is more likely to crunch your fingertips than your gray matter, thanks to the way its toothed pieces intertwine and move together. When you spin one of the cube’s faces, it moves the inner ring along with it, minimizing just how mixed up its colors can get.

The 54 squares of color on a Rubik’s Cube can mix into 43 quintillion variations (that’s 21 zeros) but are always within 20 moves of being solved. The uniform shape makes it easy to visualize how colors will shift, an ideal scenario for crafting algorithms of your own and working on speed-solving.

Cubers debate the difficulty of the angle-cut Skewb: While the twists and turns necessary to untangle it are easy to crib from seasoned solvers, figuring them out on your own can prove mind-breaking. Its rotational axes cut so deep that a single move affects all six sides of the block.

The cuts on the Square-1 create a mix of diamonds, triangles, squares, and rectangles, which make the puzzle shape-shift as you mess with it. In some of the 435.9 trillion possible machinations, corners can end up in the middle, making the toy more M.C. Escher than Rubik’s.

Scrambling a new Bandage Cube can be just as frustrating as solving one. The faces are a mix of squares and rectangles, so the longer shapes can block rotation—puzzlers call this bandaging. So even if a piece is only one corner off, it might take dozens of steps to get it in place.