Finally, a useful way to get rid of those pesky things 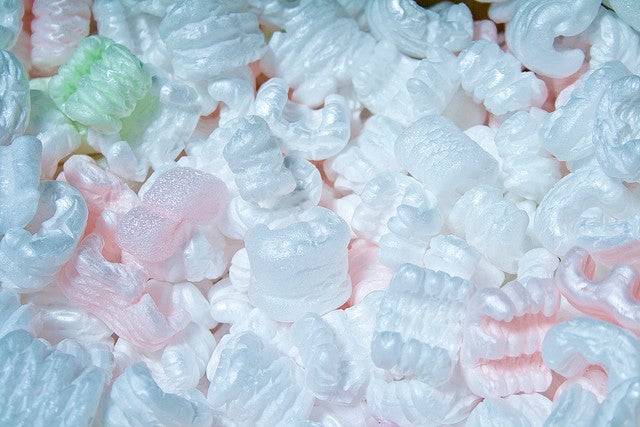 As Vilas Pol, a chemical engineer at Purdue University, unpacked new materials for his lab, the huge number of packing peanuts overwhelmed him. His team was dumping them out by the thousands, he says. Though many packing peanuts are made from biodegradable materials like cornstarch, they also contain chemicals that are harmful to human health and slow down the degrading process, making them take up an enormous amount of space in landfills. So Pol and his team devised a way to reuse packing peanuts by turning them into rechargeable batteries. The team presented their work on Sunday at the meeting of the American Chemical Society in Denver.

By baking them at about 1,100 degrees Fahrenheit, the researchers turned the puffy peanuts into thin microsheets of carbon. Sheets like these are often used in rechargeable batteries as one of the layers between which charged lithium particles move when the battery is being depleted or charged. Once baked, the packing peanuts’ crystal structure holds lithium ions more effectively than other carbon lattices, which means this material could make batteries that can hold a charge for longer than batteries that are currently available. The baking temperature is also much less than what is usually required to make carbon microsheets. Pol notes that using less energy makes the process even more environmentally friendly.

Because packing peanuts are widely available and the process is pretty straightforward, Pol said his method could be easily scaled-up and ready for commercial use within two years.