In a new silver ball sim for the Wii, real-world classic tables are paired with advanced table-tilting physics 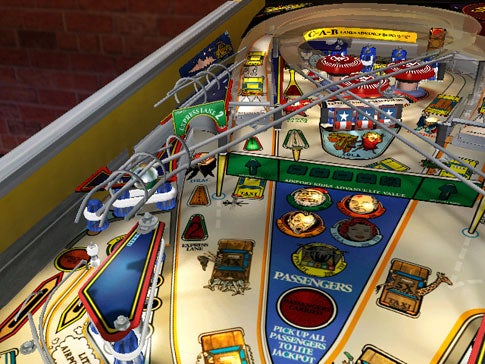 Just because game developers have the technological cojones to create a perfectly accurate simulation of the real world doesn’t mean it’s a good idea. The more a simulated racing-game car handles like the real thing, the more likely I am to destroy it on the first turn. If The Sims were an accurate simulation, you’d uninstall the program after the first insufferable meeting at work or interminable family argument over original recipe versus extra-crispy.

Sometimes, though, the accuracy of the simulation is precisely where the fun lies.

Recently I’ve been playing a spot-on sim with obsessive zeal: Pinball Hall of Fame: The Williams Collection, for the Wii. There are versions for PS2 and PSP, but the Wii offers a secret sauce. You play using the Wiimote and the nunchuk together. Each controller has an identical button on the front that makes a perfect flipper trigger. Even better, the controllers are motion-sensitive, so you can shake the simulated table by moving your hands exactly the way you’d shake a real pinball machine. Earlier pinball sims designated controller buttons for imparting virtual oomph, but they couldn’t capture the joy of saving a ball from draining down the outer lane using just enough body English (“Don’t tilt! Don’t tilt! Don’t tilt!”) the way a Wii controller does.

Hall of Fame gets the physics right, too. Ever since I was a young boy, I’ve played the silver ball, so I bring a certain subtlety to my game. The Williams Collection accurately rewards me for skillful ball control, and spanks me for muffing a shot.

The table artwork practically glows with realistically oversaturated colors. And the sounds, from the ping of the bumpers to the music and voices of later models, are reproduced with loving care. You can choose from several camera angles, from a static overhead view of the entire table to mobile cameras (my preference) that follow the ball without zooming in so close that you lose track of your position.

All this artistry and technology would be for naught if the games themselves weren’t fun to play. Fortunately, the developers have scrupulously re-created some of the best pinball machines ever made. There’s Gorgar (1979), the first talking pinball machine, along with Black Knight (1980), featuring a then-revolutionary dual-level playfield, and Space Shuttle (1984), with its perfectly positioned drop-targets and ramps.

Taxi (1988) is an insanely busy, noisy machine featuring Dracula, Santa Claus and Soviet premier Mikhail Gorbachev among your potential passengers (somehow, when played late at night in a local bar, that made perfect sense). Even so-so machines like Jive Time (1970) have a certain historic appeal, and the fact that the simulation has been tuned to reflect the less-powerful bumpers and flippers of the day adds to the fun.

More-modern machines like Whirlwind (1990), with spinning disks that alter the course of the ball as it passes, seriously challenge the player but not the software. Even with multilevel tables and several balls zooming around simultaneously, the game never stutters or freezes.

There are 10 tables in all, including Funhouse (1990), the quarter-sucker that made me choose the mediocre pizza parlor in our neighborhood over the far-superior one across town, just for the pleasure of playing. The table incorporates an animated, three-dimensional ventriloquist dummy’s head that taunts you throughout the game. Hit the targets just right, and you can put the annoying little creep to sleep and then slap the ball right into his gaping mouth, triggering multi-ball mode and, more important, really ticking off your tormentor. It may be a simulated pinball table, but the sense of triumph is deliciously real.