New Levitator Lofts Styrofoam Bits *And* Moves Them Around 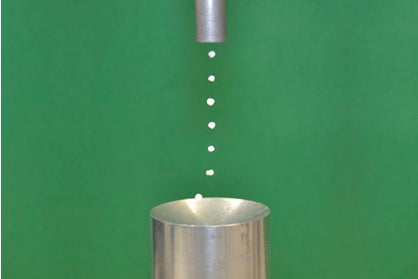 So this is a new acoustic levitator. It’s able to float those little blebs that make up Styrofoam—which, I know, you can levitate basically by blowing on, but this machine does it with sound waves, okay? In addition, the levitator is designed so that users can move the levitating blebs around, which acoustic levitators have never been able to do before. Oooh.

Previously, acoustic levitators worked by sending out sound waves from an ultrasonic transducer to a reflector. The waves bounced back and forth many times between the transducer and reflector. When the two components were just the right distance from one another—the distance had to be a multiple of half a wavelength—a standing wave appeared between them. In a standing wave, multiple waves add up just right so that some parts of the resulting wave are still. These are called nodes. The rest of the wave is extra big. Acoustic levitators make standing waves that produce enough force to hold particles in the nodes. If someone moves the transducer or reflector, however, that force disappears.

Check out the Argonne National Laboratory’s acoustic levitator, below, with its stationary transducer and reflector:

In the new design, built by physicists from Brazil and Uruguay, the acoustic levitator sends out a sound wave that bounces only once on the surface of the reflector. This still creates a standing wave with nodes, but because the waves aren’t reflecting multiple times, the nodes are mostly independent of the distance between the transducer and the reflector. Even if you move the transducer, the nodes remain. You can read the original 1978 patent on this idea here.

Interference between the emitted sound wave and its reflected wave makes nodes where the new acoustic levitator is able to levitate small, light things.

So what can you use an acoustic levitator for? Researchers have proposed putting levitators to work for a number of chemistry experiments in single drops. Beyond that? We’ll have to see.