If the task requires creativity or mental rotation, music can increase performance. 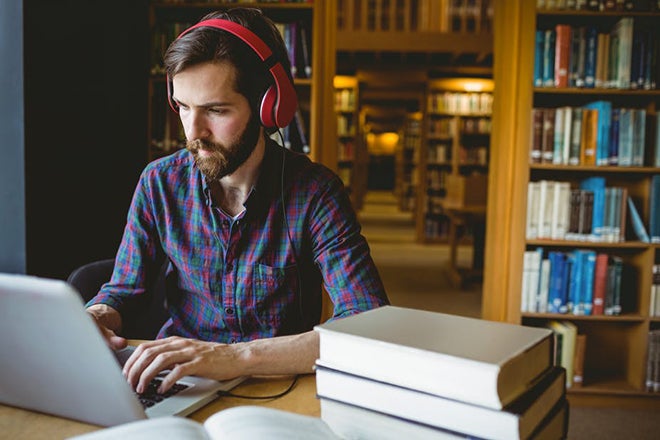 Many of us listen to music while we work, thinking that it will help us to concentrate on the task at hand. And in fact, recent research has found that music can have beneficial effects on creativity. When it comes to other areas of performance, however, the impact of background music is more complicated. The assumption that listening to music when working is beneficial to output likely has its roots in the so-called “Mozart effect”, which gained wide media attention in the early 1990s. Put simply, this is the finding that spatial rotation performance (mentally rotating a 3D dimensional shape to determine whether it matches another or not) is increased immediately after listening to the music of Mozart, compared to relaxation instructions or no sound at all. Such was the attention that this finding garnered that the then US governor of Georgia, Zell Miller, proposed giving free cassettes or CDs of Mozart’s music to prospective parents. Subsequent studies have cast doubt on the necessity of the music of Mozart to produce this effect – a “Schubert effect”, a “Blur effect”, and even a “Stephen King effect” (his audiobook rather than his singing) have all been observed. In addition, musicians could show the effect purely from imagining the music rather than actually listening to it.

So researchers then suggested that the “Mozart effect” was not due to his music as such, but rather to people’s optimum levels of mood and arousal. And so it became the “mood and arousal effect.”

Unfortunately, the situations in which most mood and arousal effects are observed are slightly unrealistic. Do we really sit and listen to music, switch it off, and then engage in our work in silence? More likely is that we work with our favorite tunes playing in the background.

How sound affects performance has been the topic of laboratory research for over 40 years, and is observed through a phenomenon called the irrelevant sound effect. Basically, this effect means that performance is poorer when a task is undertaken in the presence of background sound (irrelevant sound that you are ignoring), in comparison to quiet.

To study irrelevant sound effect, participants are asked to complete a simple task which requires them to recall a series of numbers or letters in the exact order in which they saw them – similar to trying to memorize a telephone number when you have no means to write it down. In general, people achieve this by rehearsing the items either aloud or under their breath. The tricky thing is being able to do this while ignoring any background noise.

Two key characteristics of the irrelevant sound effect are required for its observation. First, the task must require the person to use their rehearsal abilities, and second, the sound must contain acoustical variation – for example, sounds such as “n, r, p” as opposed to “c, c, c”. Where the sound does not vary much acoustically, then performance of the task is much closer to that observed in quiet conditions. Interestingly, it does not matter whether the person likes the sound or not. Performance is equally as poor whether the background sound is music the person likes or dislikes.

The irrelevant sound effect itself comes from attempting to process two sources of ordered information at the same time – one from the task and one from the sound. Unfortunately, only the former is required to successfully perform the serial recall task, and the effort expended in ensuring that irrelevant order information from the sound is not processed actually impedes this ability.

A similar conflict is also seen when reading while in the presence of lyrical music. In this situation, the two sources of words – from the task and the sound—are in conflict. The subsequent cost is poorer performance of the task in the presence of music with lyrics.

What this all means is that whether having music playing in the background helps or hinders performance depends on the task and on the type of music, and only understanding this relationship will help people maximize their productivity levels. If the task requires creativity or some element of mental rotation then listening to music one likes can increase performance. In contrast, if the task requires one to rehearse information in order then quiet is best, or, in the case of reading comprehension, quiet or instrumental music.

One promising area of the impact of music on cognitive abilities stems from actually learning to play a musical instrument. Studies show that children who are being musically trained show an improvement in intellectual abilities. However, the reasons behind this are, at present, unknown and likely to be complex. It may not be the music per se that produces this effect but more the activities associated with studying music, such as concentration, repeated practice, lessons and homework.

Nick Perham is a Senior Lecturer in Psychology at Cardiff Metropolitan University. This article was originally published on The Conversation.