How It Works: The Dreamliner’s Super-Efficient Powerplant

The GEnx engine, the powerplant of Boeing’s 787 Dreamliner, burns 15 percent less fuel than conventional jet engines by using fewer components and lighter composite parts. Flying in 2009, the engine will also be quieter and more durable 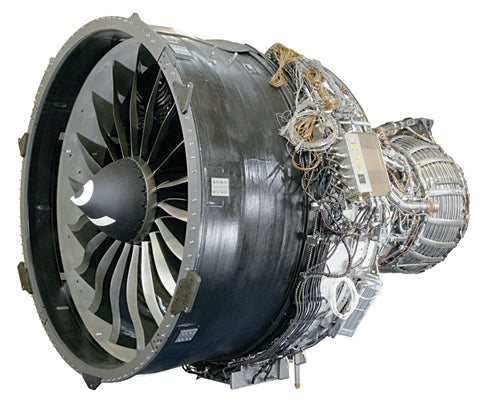 In a “high-bypass” turbofan engine like the GEnx, 90 percent of the thrust comes from spinning fan blades in front that draw in massive quantities of air and force it out in a ring around the engine’s center, or core. The GEnx’s primary innovation is in its fan blades, which have been reshaped to move air more efficiently with fewer blades and are made of carbon fiber to save weight.

In order to keep that fan turning, a small percentage of the incoming air instead flows into the core, where it passes through two compressors, mixes with fuel, and ignites in a combustor. That combustion powers turbines that drive the fan up front. The exhaust of that core air provides the other 10 percent of the engine’s thrust.

Click the image below to expand our piece-by-piece look at the GEnx’s innovative construction (will open in a new window.) Source images courtesy General Electric