Germany Seeks the Reich Stuff for a Robotic Moon Landing 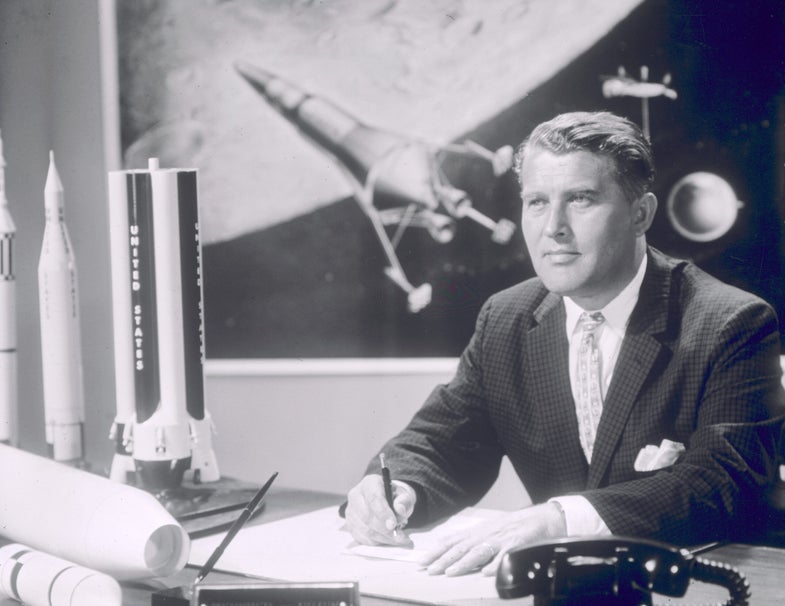 Germany no longer wants to sit on the sidelines of the recent rush back to the moon. A German official suggested that his country could aim for an unmanned lunar landing within the next decade around 2015, and also pushed for cooperation with Europe and the United States.

Germans have so far only had a proxy taste of lunar glory through Nazi rocket scientist Wernher von Braun. The father of modern rocketry spearheaded U.S. development of the Saturn V rocket which helped land the first men on the moon.

Both the United States and China are actively seeking to put their astronauts back on the lunar surface. Other nations such as Japan, China and India have also sent lunar probes to orbit, land on and occasionally crash into Earth’s natural satellite.

A new unmanned effort by Germany would cost around 1.5 billion euros ($2.12 billion) over five years, according to Economy Ministry State Secretary Peter Hintze. Reuters reports that Hintze expressed hope of encouraging German industry to develop new innovations and technologies for the effort, during an interview with ZDF television.

The German official also expressed confidence in the German Aerospace Centre (DLR), and emphasized a focus on robotics developments. He touted the benefits of a moonshot despite the recent economic recession.

“This year we mobilized 5 billion euros for the old car scrapping premium, so we can probably also manage 1.5 billion euros,” Hintze said according to The Local.

Cash for clunkers may get all the attention during hard economic times, but future investment in a moon landing could pay off even more. And besides, we’re eager to see a robot roll onto the lunar surface accompanied by a cheery transmission of “Deutschland Uber Alles.”