Japan Plans a Moon Base by 2020, Built by Robots for Robots

America may have eighty-sixed its moon base ambitions, but the Japanese have no plans to let perfectly good lunar real... 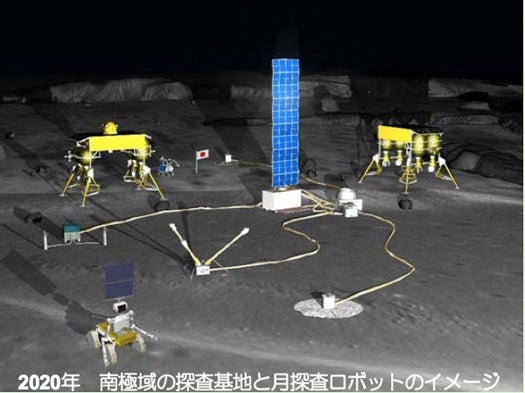 America may have eighty-sixed its moon base ambitions, but the Japanese have no plans to let perfectly good lunar real estate go to waste. An ambitious $2.2 billion project in the works at JAXA, the Japanese space agency, plans to put humanoid robots on the moon by 2015, and now official backing from the Prime Minister’s office says the Japanese could have an unmanned lunar base up and running by 2020.

Key to all of this, of course, is the robots themselves, and who better than the Japanese to dream up and realize the kind of intelligent, self-repairing, multitasking bots that will be needed to fulfill such a mission.

As currently envisioned, the robots that will land on the lunar surface in 2015 will be 660-pound behemoths equipped with rolling tank-like treads, solar panels, seismographs, high-def cameras and a smattering of scientific instruments. They’ll also have human-like arms for collecting rock samples that will be returned to Earth via rocket. The robots will be controlled from Earth, but they’ll also be imbued with their own kind of machine intelligence, making decisions on their own and operating with a high degree of autonomy.

Those initial surveyor bots will pave the way for the construction of the unmanned moon base near the lunar south pole, which the robots will construct for themselves. That base will be solar powered and provide a working/living space future robot colonizers, as well as — presumably — a jumping off point for future human moon dwellers.

Sound far-fetched? It’s certainly an ambitious project given the timeline. But considering Americans put actual men on the moon in a decade span with far inferior technology it certainly seems within the realm of possibility. Moreover, the massive technological fallout from that initial push for the moon was a boon for private industry, seeding some important and amazing technological breakthroughs. Even if Japan falls short of its 2020 deadline, the advances in robotics technology that could fall out of this little project could be as exciting as the moon base itself.