Read PopSci's original article on the first G-suit, in memory of its pilot-saving creator 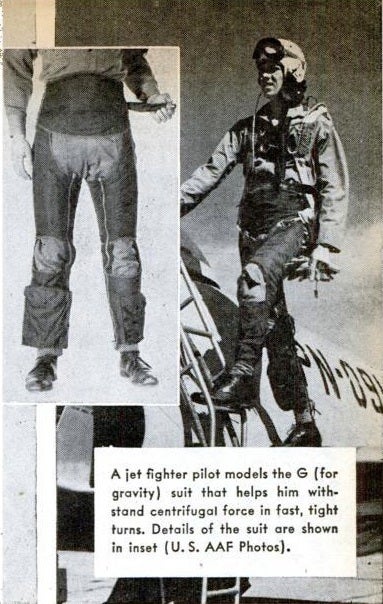 The New York Times just reported the death of a man who saved — and contines to save — many lives: Dr. Earl Wood, one of the inventors of the G-suit. The G-suit, created in the 1940s, is a pressurized outfit that keeps pilots from losing consciousness during fast turns and dives. Military pilots started using it during World War II to remain alert and prevent crashes, and they (and astronauts) still use similar suits today.

PopSci covered the G-suit in 1946, not long after its introduction. As we explained then, it was developed by researchers from the Air Force, the Navy, and the Mayo Clinic, where Wood worked. The suit contains air sacs near the pilot’s thighs and middle, which automatically inflate when an ultra-fast turn produces a force many times that of gravity. The puffed-up sacs press on arteries and keep the pilot’s blood pumping, when ordinarily it might drain away from the brain and cause blackouts.

Read our original article on the G-suit here. You’ll notice that the article also mentions other attempts to combat high-pressure forces, like the idea of having pilots fly lying flat on their faces — an innovation that thankfully never took off like the G-suit did.